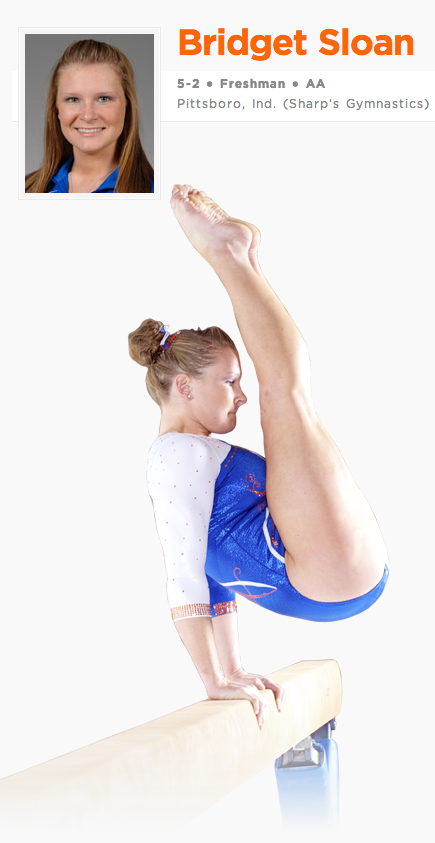 This week we talk to 2009 World All-Around Champion and University of Florida freshman, Bridget Sloan. She tells us about the transition to NCAA gymnastics, the athletic trainer who she calls her surrogate father, air pollution at the Beijing Olympics, age falsification and Martha Karolyi commenting on her weight on television.

In that special way, that only the two best satirists in the business can do, Spanny and Uncle Tim review Gymnastike’s groundbreaking documentary series about Mary Lee Tracy’s elite program at Cincinnati Gymnastics. Check out Spanny’s recap here. We talk about our favorite NCAA meets so far, UW’s bad ass Kylie Sharp who is competing despite needing a liver transplant  and OSU’s shocking fashion-related injury that even the writers of Make It Or Break It couldn’t have thought up.

Ellis Mannon of Minnesota. High bar dismount of double front with one and a half twists.

Adrian Evans’ hand slips off of the ring before his dismount.

Unexpected Choreo of the Week- Kaylyn Millick from WV. Clean, crisp, and innovative (around the 9:30 mark).

Sarah DeMeo of Alabama vs LSU on beam.

Great interview with Bridget. She is wonderful and I hope she’ll do great things in her collegiate career. By the way – Virginia Tech where the shooting was in 2007 is in Virginia, not West Virginia.

I’m glad you asked Bridget about the comment Martha made about her weight. I was surprised by her original reaction in the video of it, since she seemed so unfazed, so it was nice to hear what she thought about it.

Also thanks for the discussion of the men’s NCAA routines as well. I’ve never seen a 1.5 twisting double front before, hope more guys start throwing unique dismounts on high bar.

1- What does Mormons and Catholic have to do with all this?
2 – So Bridget does not deny the moment and what we all saw in the YouTube video: https://www.youtube.com/watch?v=l8tD2Gn6szk