Behind The Scenes: Liverpool Reveal 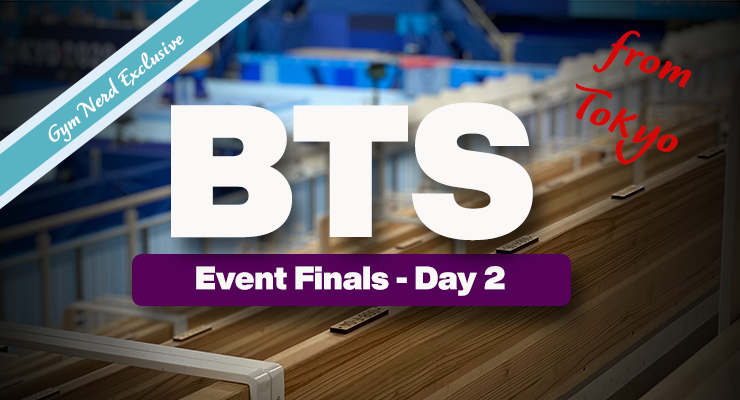 Welcome to Behind The Scenes!

BTS is a weekly Q&A podcast just for club gym nerd members! We’re providing daily coverage after each day of competition during the 2020 Tokyo Olympics! It’s our appreciation love letter to club members for supporting the show. Here’s how to ask questions live.

Please login to your Club Gym Nerd account to listen and/or watch this episode. Not a member? Join here.

How is spitting on hands before vaulting covid-safe? Is the vault cleaned between vaulters?

Can we please invent a drink called the Gelya Mai Tie?

I have to add (in response to your discussion on artistry. Which I miss greatly!) here’s one… Anna Pavlova’s 2008 floor routine! Artistry and beautiful tumbling. The whole package! Thanks for the Olympic Podcasts!!!

I am so pleased that Jade got her medal BUT do you think it was a gold routine? Particularly when compared to the artistry of all of the other medalists (and all the other finalists imo…) I love how she has really cleaned up her execution over the last few years but her dance and artistry still leave me feeling flat…

Same! I would feel way better with the gold going to Ferrari and the silver going to Carey. But Code is Code and artistry is (even if not sufficiently credited) luckily for us all to be enjoyed ❤️

Listunova’s routine is surrealist artistry. Her dance is skilled, graceful and comedic interpretation and I feel like you guys are not seeing it for what it is. Look again! It’s fabulous and I feel sad for her today!

How are Grace and Jordan still in the country? Aren’t they supposed to leave within 48 hours? Are they reserves on any events?

since the olympics has to be prepared with extra medals in case of ties, i wonder how many they are left with at the end.

Behind The Scenes: Liverpool Reveal

Behind The Scenes: Solve For “Was China Robbed””

Behind The Scenes: September

Behind The Scenes: Triumphant Return

Pakhniuk: When the head coach changes, I’ll come back  http://eng.gymnovosti.com/pakhniuk-when-the-head-coach-changes-ill-come-back%ef%bf%bc/