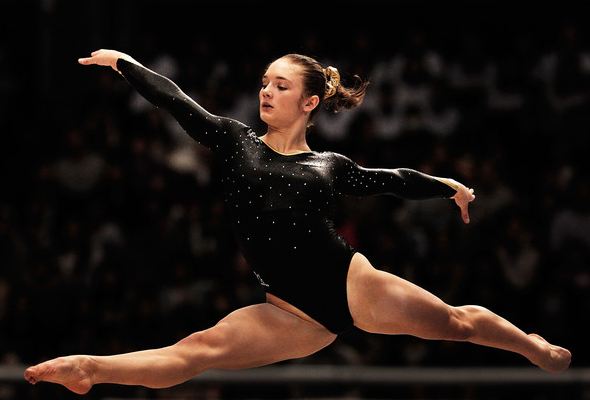 This week we talk to the 2012 Olympian Jenni Pinches from Great Britain. She talks to us about butt glue, working on-air with Olga Korbut for the BBC, life at the Lilleshall national training center, being coached by Amanda Reddin alongside living legend Beth Tweddle, and living a purposeful NerdFighter life.

Twitter- @jempin515, Tumblr-  jempin515, Blog- www.jenniferpinches.com. Her favorite show, Vlog Brothers who remind us, “Don’t Forget To Be Awesome!”  (see below for instructions on how to throw up the NerdFighter symbol). 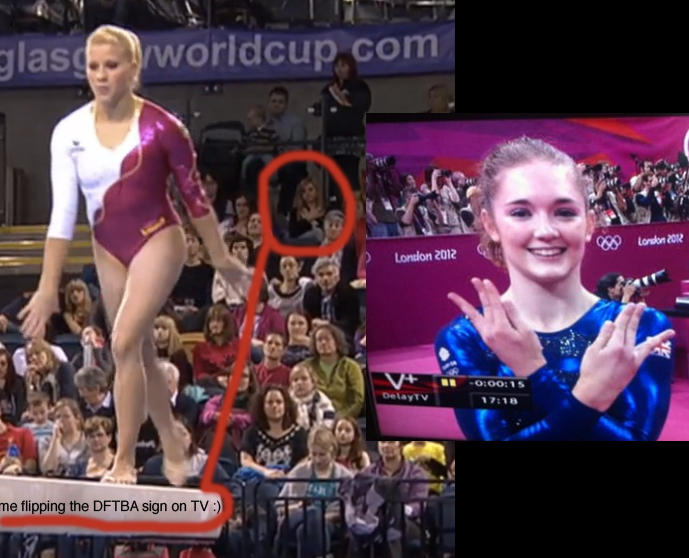 Pinches floor routine at the Olympics in London.

Dominique Dawes in Missy Elliot’s video for We Run This.

Sacramento State’s retro-beam-dominatrix Dallas Smith. She does a front handspring  to Portocererro (front flip to a tooshie), followed by a Garrison (one-handed sideways Valdez).

Kaitlynn Urano from Iowa State pleased us with her musicality and fun floor work.

Hilarious-Angry Fall of the Week goes to Florida’s Kytra Hunter. 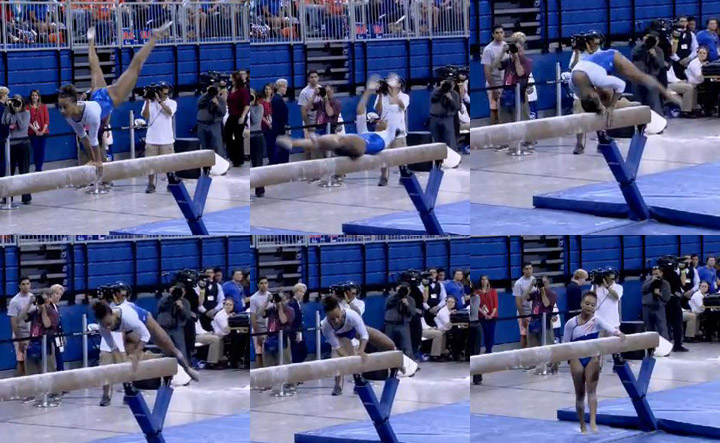 Suck-It Haters Routine of the Week: Llomincia Hall’s 10 on Floor.

Happy Freakin’ Valentine’s Day! Now download the free app and go feel up your boobs! For iPhone and Android devices.

The UC Berkeley Women’s Gymnastics program is raffling off a seven-day, six-night cruise through the Mediterranean aboard a Norwegian cruise ship. Prices start at $20 for one ticket, $50 for three tickets and $100 for seven tickets, and the deadline to enter is April 27. http://www.calbears.com/sports/w-gym/spec-rel/020813aaa.html

The Sacramento State video looks like it’s of beam but when you click on it it changes to floor … confused.

Should be fixed. Here’s the direct link http://youtu.be/hkTH1b_Qsdk

Still showing floor actually … but seeing as the BB video’s blocked from my country it looks like I’m not going to be seeing it either way!

Wow, what country are you in?

Also while I’m listening – Deng Linlin didn’t miss out on AA by the 2-per-country, she came 6th in the Final! Right after Sandra Izbasa, and just ahead of Huang Quishang. As a huge DLL fan, I store these facts 🙂 Yao Jinnan missed out after poor scores on everything except bars.

You are correct! Thank you! http://en.wikipedia.org/wiki/Gymnastics_at_the_2012_Summer_Olympics_%E2%80%93_Women's_artistic_individual_all-around

Any chance you are planning on interviewing Alicia? Always a fantastic interview but most people would love a little more details of what her post trial thoughts were.

Just found the podcast and Love It. I’m getting caught up on all the archived episodes and found a little mistake on this page. Kaitlynn Urano is from the University of Iowa, not Iowa State, which matters a lot of you’re from Iowa (which I am not). I can’t believe my fellow Minnesotan Spanny didn’t catch it! 😉

And now I found a little mistake in my post. *If, not of. Sorry, I’m booing myself.

This website uses cookies to improve your experience while you navigate through the website. Out of these cookies, the cookies that are categorized as necessary are stored on your browser as they are essential for the working of basic functionalities of the website. We also use third-party cookies that help us analyze and understand how you use this website. These cookies will be stored in your browser only with your consent. You also have the option to opt-out of these cookies. But opting out of some of these cookies may have an effect on your browsing experience.
Necessary Always Enabled
Necessary cookies are absolutely essential for the website to function properly. This category only includes cookies that ensures basic functionalities and security features of the website. These cookies do not store any personal information.
Non-necessary
Any cookies that may not be particularly necessary for the website to function and is used specifically to collect user personal data via analytics, ads, other embedded contents are termed as non-necessary cookies. It is mandatory to procure user consent prior to running these cookies on your website.
SAVE & ACCEPT
wpDiscuz
12
0
Would love your thoughts, please comment.x
()
x
| Reply