This week we talk to toe-point champion of the universe, Ivana Hong. She was a member of the 2007 gold medal winning World Championship Team and won a bronze medal on balance beam at the 2009 World Championships in London. We ask what she learned from each coach she had during her elite career, if she will join Cirque du Soleil or return to elite after college, what advice she’d give her younger self, what it takes to be so tranquil on beam, and how she learned to be so very very elegant.

We tell our favorite drunken and/or it-can’t-be-that-hard gymnastics wipeout stories, talk about NCAA conference title meets, Jesolo, Cottbus, and French nationals. Plus our favorite British Olympian, Jenni Pinches, joins us to talk about the British Championships. Check out her blog for full details with videos. Don’t forget to tweet #SendJenniToMoscow to @BGMediaTeam and DFTBA!

The most perfect double front of all time, as performed by Ivana Hong.

Italy’s Erika Fasana posted a photo of her face after seeing Biles perform. 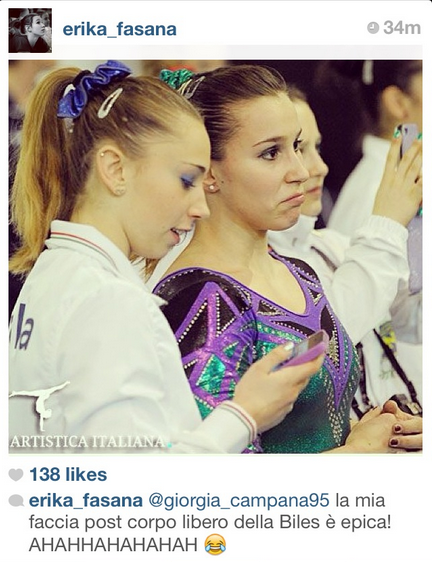 A combination of this and last week’s discussions reminded me of the most awkwardly hilarious moment of the Glasgow world cup: every time one of the Japanese athletes finished a routine, they played … Gangnam Style. Every. Single. Time.

THE HORROR! Didn’t they have any Korean athletes to harass with that song? For shame.

Ohhhh, gotcha. We assumed and you know what that makes us. 🙁
Well if you were on that team, you would have been awesome!

Loved the British Championships recap. On a shallow note, I thought the British ladies’ team were so neat and well-dressed. Their Quatro and Alpha Factor leotards are so much nicer than the US ladies’ GK ones, and I loved all the matching buns.

This website uses cookies to improve your experience while you navigate through the website. Out of these cookies, the cookies that are categorized as necessary are stored on your browser as they are essential for the working of basic functionalities of the website. We also use third-party cookies that help us analyze and understand how you use this website. These cookies will be stored in your browser only with your consent. You also have the option to opt-out of these cookies. But opting out of some of these cookies may have an effect on your browsing experience.
Necessary Always Enabled
Necessary cookies are absolutely essential for the website to function properly. This category only includes cookies that ensures basic functionalities and security features of the website. These cookies do not store any personal information.
Non-necessary
Any cookies that may not be particularly necessary for the website to function and is used specifically to collect user personal data via analytics, ads, other embedded contents are termed as non-necessary cookies. It is mandatory to procure user consent prior to running these cookies on your website.
SAVE & ACCEPT
wpDiscuz
7
0
Would love your thoughts, please comment.x
()
x
| Reply