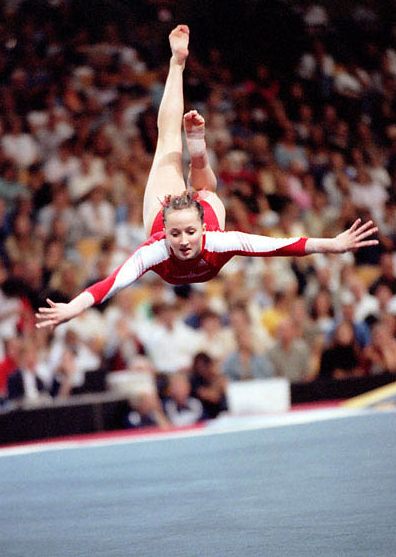 This week our guest is two-time US national champion, 2000 Olympic team bronze medalist, and five-time NCAA champion, Kristen Maloney. She opens up to us about her highs and lows; how did it feel to be awarded an Olympic medal 10 years after the Games (because the Chinese team falsified their ages); and being told you’d never do gymnastics because most of your leg bone had been eaten away by an infection? What does her eclectic experience as a Cirque artist, Olympic and college gymnast bring into her coaching now? And as always, we get to the important facts; even though she’s a huge bad ass who always hit and could triumph above any obstacle, she has a super-idol who makes her gymnerd out!

Shang Chansong CHN BB 2013 Tokyo World Cup. She had the highest beam score of the meet–not Iordache good or Ohashi good, but the routine shows potential.

Great interview…Kristen just tweeted that she 100% believes that Vanessa Atler should have been on the team…that another one of those topics gym fans LOVE to discuss.