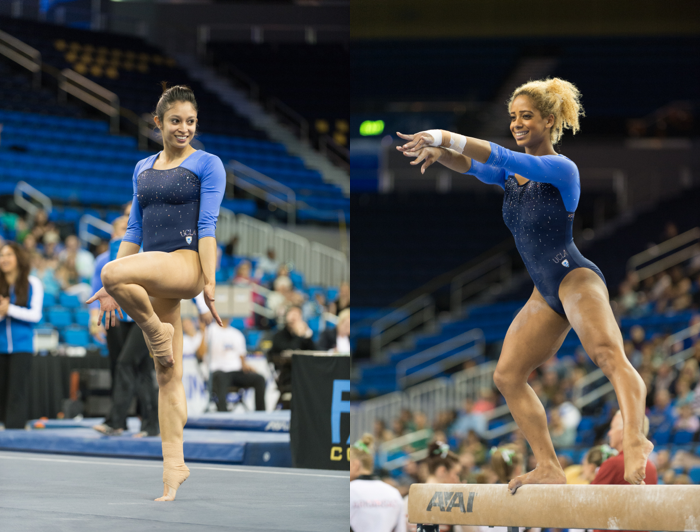 UCLA’s Vanessa Zamarripa has once again finished the regular season ranked number one in the all-around. We talked to her about being the first American to compete the Cheng vault, mercilessly teasing her coach, competing an upgraded version of the Cheng (the Zamarripa?), and if she’ll return to elite gymnastics after graduation. Her teammate, British Bruin freshman and 2012 Olympic alternate, Danusia Francis tells us what it was like to attend a sports boarding school in a castle, doing injury prevention exercises for her extreme flexibility, competing one handed exhibitions before each session of Olympics, and how she is adjusting to life in Lalaland.

In the second half of the show, Blythe brings us a preview of the European Championships,  Lauren Hopkins from The Couch Gymnast chats with us about Regionals, Uncle Tim gives us the juicy details from the coache’s press conference, and  we pick a not-to-be-missed routine from each event at this weekend’s NCAA Championships.

To prepare fully for this weekend’s competition, including analysis of scoring potential, read The Balance Beam Situation. Read that blog and become a better gymnastics fan.

Season 21, Episode 7: Celery Beam LISTEN WATCH Club Gym Nerd members can watch the podcast being recorded and see video clips of the gymnastics while we discuss.Please login to your Club Gym Nerd account to listen and/or watch this episode. Not a...

LISTEN WATCH Club Gym Nerd members can watch the podcast being recorded and see video clips of the gymnastics while we discuss. Gym Nerd School videos are available to everyone because education if a fundamental human right for crying out loud. If you'd like to...