Getting to the Games: A Checklist 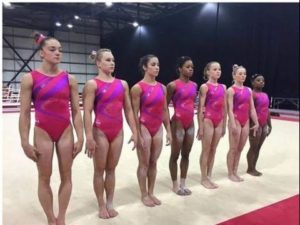 Secret Classics gave us a great indication of absolutely nothing. Aly’s weakest event is still bars, Ashton Locklear is still one of the best bar workers in the world and Gabby Douglas is still #blessed.

As we approach P&G Championships, it holds true that the Olympic Team is a puzzle. Here, GymCastic has broken down a checklist of what each contender needs to do between now and the end of Olympic Trials to make the Team, and what or who stands in her way.

The term “lock” was invented for a gymnast like Simone, because at this point, medals have likely already been engraved with her name. Her checklist is simple:

Gabby’s main focus is to be as much of a challenge to Simone as possible in case Simone has an off day in the AA final. Gabby is pretty much a lock for the Team with others clicking at her heels.

This is the most exciting matchup. All three off these gymnasts can make the Team. If they don’t, look for a UB specialist to take one of these spots.

Along with the top contenders, a few gymnasts have presented a strong case for themselves throughout the quad and are likely alternates. These girls are also favorites for a Team spot if one of the major players are injured.

Take our checklist into account, and tell us who’s on your Team!

See related: Getting to the Games: A Test Event Guide

Stay up to date with the latest happenings at the 2021 NCAA Championship Semifinal 2, including: Oklahoma, Utah, LSU and Alabama. Our Live Blogging team today includes: Jessica O'Beirne (from the couch) *No need to refresh the page, new updates will automatically...

Stay up to date with the latest happenings at the 2021 NCAA Championship Semifinal, including: Florida, Minnesota, Cal, and Michigan. Our Live Blogging team today includes: Jessica O'Beirne (from the couch) *No need to refresh the page, new updates will automatically...