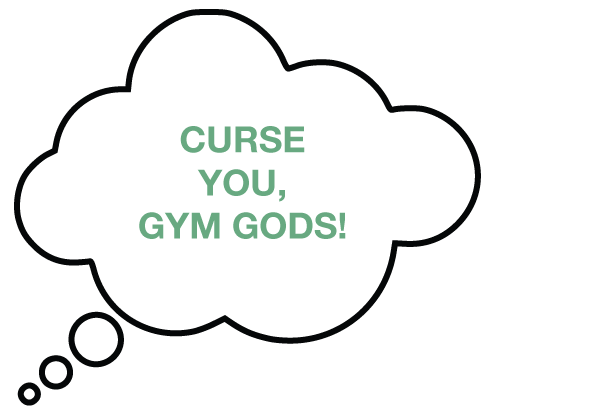 Don’t worry, though. We’ve got your back. To help you better understand college gymnastics, we’ve prepared a quick infographic. Warning: It doesn’t list every skill in the Code of Points, and it focuses only on tumbling. But it should answer some of your burning questions, such as:

Take a look at the visual, and see if you can answer some of your lingering questions…

Why do college girls do all those #@!* rudis?

In order for their routines to be considered up to “competitive level,” gymnasts need to perform a D salto, and no offense to the rudi-lovers, but the skill is one of the easier D saltos out there. So, why not take advantage of the Code by performing the easiest possible D skill?

Why doesn’t anyone throw a Silivas?

In college gymnastics, you throw a Silivas only if you want to show off (and potentially rack up deductions). As you may have gathered, difficulty maxes out at an E in the J.O. Code of Points, which means that a double double is worth the same as a full-in. So, if you’re going to do a Silivas, it better be just as impeccable as your full-in. In other words, it’s gotta be at least Jordyn Wieber good.

Bonus question: How much connection bonus does Jessica Savona receive for her first pass?

A double back is a D.

And it’s an indirect connection, which means she receives +0.2 in connection bonus.

Speaking of bonus, here’s another bonus question: Why does Jessica Savona do a random punch front in the middle of her routine?

The punch front is about as silly as Larisa Iordache’s side somi at the end of her routine. Yet, even though they feel out of place, both skills fulfill a specific purpose: they meet the composition requirements. Iordache’s side somi fulfills the front/sideways requirement in elite gymnastics, and Jessica’s front tuck fulfills the front/sideways salto requirement in college gymnastics. Without an ‘A’ front salto, Jessica would lose 0.1.

A tricky bonus question: Under the 2014 rules, would Allyse Ishino’s floor tumbling be considered “up to competitive level”?

Back in 2010, many gymnastics fans complained about Ishino’s routine because she performed only two tumbling passes. (Most gymnasts performed three at the time.) Under the 2014 rules, two-pass routines are acceptable as long as one pass has a D salto and the second, a D salto or +0.2 in connection bonus. In Ishino’s case, her double pike fulfills the D requirement, and as far as connection bonus goes…

A front layout is a B.

BUT! Allyse’s pass does fit the requirement for a two-skill connection. Under the 2014 rules, Ishino’s combination pass would receive +0.2 bonus for the C (back 1.5) + B (front layout) combination. In other words, Ishino would be considered “up to competitive level” in 2014.

In case this hasn’t dawned on you… In order to be “up to competitive level,” college gymnasts can get away with performing a double pike and a back 3/2 to a front layout. That’s it! That’s all the tumbling they have to do! How boring, right? That’s like watching a mid-90s Romanian bar routine!

Luckily, a lot of the top college gymnasts take pride in doing more than what is required. So, don’t expect to see too many two-pass floor routines this season.

In the next few weeks, we will continue looking at the NCAA requirements for beam and bars. In the meantime, leave a comment if you have any questions.

what can we do to encourage vaults other than a Y full? I wonder if the judges get really bored of judging vault at big NCAA meets.

Also can we talk bout beam dismounts? NCAA beam dismounts are so cool. I love some of the fun combos like Pesek and Gerber’s tumbling off the beam into a back full or front ariel into back gainers.

What score do they start at before bonus? How much is a D worth?