Svetlana Khorkina and Simone Biles are unquestionably the queens of women’s artistic gymnastics. Although it’s almost impossible to compare their respective gymnastics styles, evaluating their respective dominance could indicate just who is the greatest gymnast of all time. It comes down to which you believe is more valuable: short-term dominance or masterful longevity.

Age before beauty, so let’s start with Svetlana Khorkina. This gymnast’s elegance and grace were unrivaled—at 5’6” she was a giant among her competitors. (Though we know gymnasts don’t have to be as short as the media believes.) Her height allowed her to create long, beautiful lines on every event that theoretically should’ve hindered her from doing the same difficulty as her peers. But Svetlana was an innovator who created eight different skills across all four events. These skills made her routines even more difficult than those of her competition. The chart below lists all of her eponymous skills with values according to the 2013-2016 Code of Points. 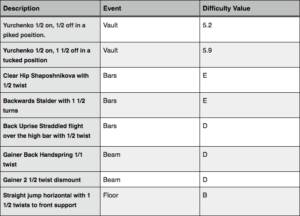 Although Simone isn’t ungraceful, her grace is massively overshadowed by her unparalleled power and precision. Her floor routine features three of the most difficult elements in the Code of Points: two H-level skills and a G. Her full-in dismount was a skill Svetlana was never even capable of performing consistently. Simone has completed a double-double in combination off BB and trained a triple-twisting Yurchenko. She could very well be the most powerful athlete in the world across all sports, and she has a tumbling element named after her.

Now, on to the medals—both World and Olympic because Simone has finally competed at an Olympic Games.

To determine who is the best by medal count, we created a point system for each color medal: gold is worth three points, silver two and bronze one. Since all medals are not created equally, AA-medal point values will be doubled, so gold in the AA will be worth six points, silver worth four and bronze worth two. Using this system, Svetlana scores 62 points, beating Simone’s 52.

According to this system taking all individual medals into account, Svetlana Khorkina is the greatest gymnast of all time. However, Simone is only 19 and has the potential to come back for 2020. She would need two AA gold medals in the next quad to top Svetlana’s legacy.

Though Svetlana currently holds the title of greatest ever strictly by the numbers, it’s not all about the numbers and it would be unfair to say Simone is the subordinate gymnast just because she hasn’t had the chance to earn more medals. While Svetlana’s longevity is something to commend, there may never be another gymnast as strong, powerful and precise as Simone Biles. And for that reason, it’s easy to make the argument that she is the greatest gymnast ever.

After looking at the numbers and the gymnasts themselves, who do you think is the best ever?

Interesting article. I think it\’s really difficult to compare gymnasts across such different quads and against a different code of points. Biles may never have done well under the 10.0, while the same could be said for Sveta under open-ended scoring. Maybe it\’s best to go with a tennis type approach and leave gymnasts not being compared across 10.0 vs. open-ended unless they overlapped during that period? This debate will probably never end UNLESS Simone did compete across two full quads and finds herself at another Olympic games. Maybe too early to tell?

The biggest flaw with this methodology is that you count world medals the same as Olympic medals. Also, gold should be double silver, at least, if not more. I would use following:

Where does Nadia rank in here?

Remember, Nadia NEVER won an All Around at Worlds. She won all kinds of Event Finals, but never that All Around. Simone, on the other hand, won the AA not once, but FOUR times. So, if you’re looking to rank Nadia V. Simone, Nadia would be the loser in that case.

Remember, Nadia never won an All Around at the Worlds she was at. Elena Mukina beat her in 1978, and, if I’m not mistaken, Nelli Kim beat her in 1979. So, Nadia didn’t have any good luck at Worlds. She won lots of event finals, but that All Around was elusive. Simone, on the other hand, won the AA THREE times at Worlds. If she was competing right now, (and training) she’d probably win Worlds RIGHT NOW. The kid is GOOD.

I think this conversation is pointless because Simone hasn’t announced a retirement yet, so you can’t compare careers. I wouldn’t be surprised if she did. Competitively she’s done almost everything a gymnast can do and being all-around Olympic champion is basically the pinnacle. If she did it back to back there would be no question.

As a gymnastics fan, I love them both and loved watching each of them compete in their eras. If I had to decide, I’d pick Simone. The fact is, with her it’s mostly not a competition. Khorkina was one of the greatest, but others could catch her, even on her best day. No one ever said “5 Gold medals” leading up to an Olympics with Khorkina, and she never won 3 individual gold medals at an Olympics. World Championships are just as competitive as an Olympics, but they’re not the same. No one knows what will happen with Simone in this next quad, so I’d save a definitive answer for the upcoming years.

To me, the \”greatest ever\” discussion cannot be dependent only on longevity (then Chusovitina would be the greatest ever!). Also, there have been many gymnasts who showed up quickly, were dominant for a short time, but then didn\’t endure (i.e. Gutsu, Shawn Johnson). The test of true greatness should be \”extended dominance\”–which both Khorkina and Biles have shown.

Over an 11 year career, Svetlana won 3 all arounds (impressive indeed). Biles winning one more than that doesn\’t impress me as much as her being undefeated during a four year run–Svetlana can\’t touch that. Also, Biles has as many individual medals in one Olympics as Svetlana had in three games. It\’s not about the numbers so much, but about the dominance, and to me there is no question that the extended dominance of Simone was of a caliber that Svetlana\’s dominance never showed.

This website uses cookies to improve your experience while you navigate through the website. Out of these cookies, the cookies that are categorized as necessary are stored on your browser as they are essential for the working of basic functionalities of the website. We also use third-party cookies that help us analyze and understand how you use this website. These cookies will be stored in your browser only with your consent. You also have the option to opt-out of these cookies. But opting out of some of these cookies may have an effect on your browsing experience.
Necessary Always Enabled
Necessary cookies are absolutely essential for the website to function properly. This category only includes cookies that ensures basic functionalities and security features of the website. These cookies do not store any personal information.
Non-necessary
Any cookies that may not be particularly necessary for the website to function and is used specifically to collect user personal data via analytics, ads, other embedded contents are termed as non-necessary cookies. It is mandatory to procure user consent prior to running these cookies on your website.
SAVE & ACCEPT
wpDiscuz
7
0
Would love your thoughts, please comment.x
()
x
| Reply