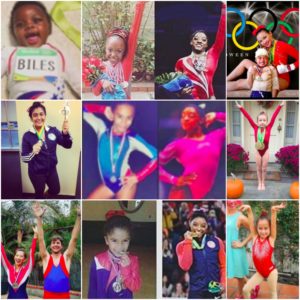 All of these Instagram users above hashtaged their costume posts with  #SimoneBiles.

We received a wonderful question from a listener with a parenting crisis. His five year-old, non-Black daughter wants to dress as Simone for Halloween. She thinks her costume won’t be complete until she is brown like Simone. She asked, “Why can’t I just paint my skin?!” The poor girl is exasperated with her parents lack of concern about her burning need to have skin that matches her heroes.

Is it wrong to paint your child’s skin black or brown for Halloween? Even if they are idolizing someone? Why is it ok to paint one’s skin green to be the Hulk or blue to be an Avatar? How to explain the history of blackface vs. dressing as your gymnastics idol to a child? GymCastic to the rescue!

First off, thanks for a really important question! I am impressed you are addressing an issue like race with your young child! Let me start by saying that I am Black and quite knowledgeable about race in America. You have the ultimate choice in matters of costume and how you want to approach dressing up. It is clear that you want to be respectful of others and so there are some things you may want to take into account as far as a Simone costume goes.

“Blackface” has been a hot topic in culture the past few years with the advent of social media. Every year a number of new intentionally hurtful costumes crop up and anger people. Some of these costumes, the extreme examples, are meant to be offensive and callous (e.g., Trayvon Martin/George Zimmerman costumes). Extreme examples have been lumped in with other blackface costumes (e.g., Julianne Hough as Crazy Eyes from Orange is the New Black). If you choose to venture into cross-racial costume town, be aware of what your costume says:

I should note that both examples listed above received backlash. I am of the somewhat non-mainstream opinion that backlash for the latter, Crazy Eyes, was a bit undeserved. Julianne, in my opinion, darkened her skin (using a light brown tanning oil) in a manner not to radicalize or call out, but simply approach Crazy Eye’s complexion. There aren’t enough ties, in my opinion, to the historical Blackface to merit outrage.
As a refresher, Blackface allowed white actors to dress as black characters. They would cover their skin in a tar color, much darker than most skin, have enlarged lips and noses and portray Blacks as stupid, jolly, goofy, and inept. This became the black stereotype and is still part of our culture. In less extreme but almost equally insidious of cases, even when blacks weren’t made fun of, Blackface was a way to give white actors work; work that easily could have gone to black actors. Blackface is a pain point because traces of its damage still remain in our culture today.
Dressing your daughter as Simone is not a way to make fun of Simone; it’s a way to celebrate her accomplishments and beauty and that’s why you, as a great parent, want to highlight that. Especially because you have a young child, I suggest not risking anyone thinking that she could be a part of a household which holds any negative bias and I would stay away from changing the color of her skin. Think of other clever ways to distinguish your daughter from the others of the Fierce Five. She could:

Stay up to date with the latest happenings at the 2021 NCAA Championship Semifinal 2, including: Oklahoma, Utah, LSU and Alabama. Our Live Blogging team today includes: Jessica O'Beirne (from the couch) *No need to refresh the page, new updates will automatically...

Stay up to date with the latest happenings at the 2021 NCAA Championship Semifinal, including: Florida, Minnesota, Cal, and Michigan. Our Live Blogging team today includes: Jessica O'Beirne (from the couch) *No need to refresh the page, new updates will automatically...