What’s at stake this evening?

Which leaves three wild card slots. Two more athletes will be selected by the Men’s Program Committee, and one by the National Team Coordinator. 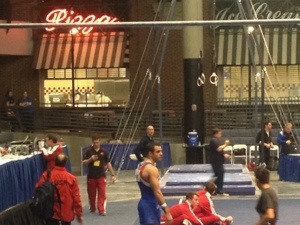 I just spoke with Jake Martin of Ohio State. He said that he has a possible MCL tear (left knee). He still needs to have an MRI.

Leotard update: Like I said on Thursday, at this point, most WAG quick hitters would be writing about the leotards, and once again, I sadly report that there are no rhinestones or curly cues on the men’s leotards. Most are competing in their college uniforms. Alex Naddour and Jake Dalton have once again opted for the “business in the front, party in the back” look–this time in white.

On Thursday, there were lots of laughs and smiles. Today, that’s not the case. Generally speaking, the gymnasts look more focused, and a few, a bit more nervous. You can tell that a lot is on the line this evening.

Sitting at the head table are Ron Gallimore, Steve Butcher, Kevin Mazeika, and Tim Daggett (among others).

About 10 minutes to go until warmups end.

It’s going to be a three-ring circus to start. Paul Ruggeri, Sean Melton, and Danell Leyva will be competing simultaneously.

Sean Melton on VT: Handspring double front–Cowboy in the air and a step back on the landing.

Danell Leyva on HB: Misses his piked Kovacs, and arches back on the landing. He gets up and rechalks. Performs the skill again and catches it. Crooked on both his Stalder 3/2 and his Rybalko. Step back on his double-twisting double back.

The Yin Alvarez clap has returned before Danell’s dismount.

Adrian de los Angeles on SR: Roll to L-cross. L-cross press to Maltese. (Shoulders a little high). Lower to back lever to cross. Swing to Yamawaki to Jonasson. Uprise to straddled planche. (Feet a little low, pulsating up and down.) Giant to handstand. Uprise to handstand. Full-twisting double layout. (Pikes it down). 14.350

Jake Dalton on FX:Tamayo with hop forward. Arabian double pike with a hop forward. He’s got a case of the hopsies. Lights dimmed during Jake’s wide-arm handstand. Back 2 1/2 to a punch front full. With a hop. Laid out Thomas (no hop). Triple full to finish with a hop forward on the landing.

Eddie Penev on HB: Missed the routine because he and Jake were competing simultaneously. 13.7 for the score.

Sean Senters on HB: Strethced Tkatchev. Straddled Tkatchev–nice and high, but catches a little close. Slight bend in the arms. Like on Thursday, looking a little archy and offline on his Stalder work. Sticks his full-twisting double layout. 13.1.

Eddie Penev on FX: Penev to open with a little hop backwards. Back 2 1/2 to front full. Wants to go out of bounds but uses his toes to stay in. (I think these men have toes that are stronger than my quads.) Wide-arm press handstand. Front double full. Looks like he was supposed to connect it to another skill. But kind of covers it with one of those stag jumps. Laid-out Thomas. Whip to triple twist. Hop off to the side. 14.6

Stacey Ervin on VT: Huge handspring double front and an NCAA stick to finish. Up on his tippy toes. We’ll see if the judges say that he had control of the landing. 15.0

Marvin Kimble on VT: Stacey’s a hard act to follow, but he puts his handspring double front to his feet. Big step forward, but he definitely pulled a lot harder today. 14.250

Sean Senters on FX: Didn’t see the whole routine, but he ran off the mat on his Arabian double pike, and he fell on a punch front layout on his penultimate pass. 12.0

Danell Leyva on FX: Double-twisting double layout. Huge step back. Looks like he took off right off the floor. Tamayo. Thomas (tucked). Press to handstand. Front full to tucked Barani. Back 2 1/2 with a huge hope forward with flying arms. Rudi to the corner. Double layout with a step back. A mini-Yin yell with arms raised and a hug for Danell to finish. 14.4

Paul Ruggeri on PH: Paul is the last gymnast to compete. Long, long, long wait before his routine. A Wu with some leg separation into a triple Russian. Forward travel to Sivado. Huge straddle on his Tong Fei. Fights to get to a handstand on his dismount. BUT he stayed on the horse, which is a huge accomplishment after a rough first night. 12.7

Kevin Wolting on HB: Yamawaki. Bent arms on the giant out of it. Falls to his back on his straddle Tkatchev half. Endo 1/1. Healy. Endo. 1/2 pirouette. Full-twisting double layout. Hop back.

Glen Ishino on HB: Falls on his Yamawaki half. Nasty fall. The rest of the routine looked good.  12.650

Danell Leyva on PH: Danell backward scissors to handstand. Misses his Li Ning to handstand… and he’s off.

Sean Melton is also off on his Kovacs on HB.

Back to Danell Leyva on PH: Magyar. Sivado. Tong Fei with some leg separation. Really fighting to keep the swinging going on his Russians. 13.150

Adrian de los Angeles on PB: Peach half. Peach. Belle (giant double tuck). Half-pirouette on the end to Tippelt (Bail to straddle sit press to handstand). Stutz. Diamadov. Back toss. Double pike. A little bit of a hop. His form was exceptionally clean throughout. 15.1

Paul Ruggeri on SR: All the other events have finished, and all eyes are on him. Everyone is yelling, “C’mon, Paul!” Kip to V-cross. Forward roll. Uprise to straddled L-sit. Giant to handstand. Uprise to handstand. Jonasson. Yamawaki. Flip to cross. (Good position) Uprise to L-sit. Bent-arm press to handstand. Front double pike. And then sits it down. 12.650

Paul Ruggeri on VT: Yurchenko half-on with a double full off. A bit of Alicia Sacramone technique. Pikes off the horse and then opens up. Step on the landing. 15.1!

Jesse Silverstein on VT: Big cowboy on his handspring double front, and he sits it down.  13.650

Adrian de los Angeles on HB: Yamawaki. Stretched Tkatchev–Great, he was missing that in warmups. Straddled Tkatchev. Endo 1/1. Jam to handstand. I think that the judges have been nailing the gymnasts on this skill, but that one looked pretty good. Double-twisting double layout to a safety roll. It was a great routine until that point. 13.5

Akash Modi on HB: A little close on his stretched Tkatchev and has to do a froggy giant. Endo 1/1–perhaps a bit late. Endo. Sticks his full-twisting double layout. 12.9

Kevin Wolting on FX: Starts with a Thomas (tucked). Front double full to a seat-height tucked Barani. Double full side pass. Right split to straight arm press handstand. Back 2 1/2 to a front half to forearms–reminiscent of Rebecca Bross at 2009 Worlds. Triple full to finish. A little hop. 12.550

Danell Leyva on VT: Does his 2 1/2 and this time puts it to his feet with a few steps. Looked a little more explosive today. 15.050

Stacey Ervin on FX: Front full to double pike. A little tucked, but still an impressive pass. A sky high Tamayo. Deep squat. Clean laid-out Thomas. Overrotates his Arabian double front dismount. Out of bounds, but he manages to keep it on his feet. 14.750

Matt Felleman on HB: Yamawaki 1/2 with a late catch. Yamawaki to a Gienger. Quast (hop full). Rybalko. Endo 1/1 and misses his hand. Jerks his arm as he swings around on one arm, but somehow manages to stay on. Repeats the skill. Sticks his full-twisting double layout. 13.750

Jake Dalton on PB: All eyes are on Jake, as he is the last competitor up. Cast to upper arms. Flip to hands. Healy. Peach 1/4. Peach to handstand. Has to puuuuuush it up a bit. Diamadov. Giant. Giant tuck-half to upper arms. Stutz. A little short. Tuck-half from upper arms to upper arms. Front uprise. Handstand. Double pike off. Small hop on his landing. 15.0

Bobby Baker on FX: HUGE cheers for Bobby. Puts his hands down on his full-twisting double front. Arabian double pike. Wide-arm press. Don’t know if it made it to handstand. Front double full. Sticks his double Arabian (tucked). Double front with a hop forward. Triple full with a hop forward. 13.1

Chandler Eggleston on VT: Beautiful 2 1/2 twisting Yurchenko. A little slide on the landing. 15.050

Kristofer Done on VT: Double with a big hop off to the side. 13.9

Paul Ruggeri on HB: He caught his Kolman, which was giving him troubles during warmups. BUT he misses his hand on his Yamawaki. Somehow stays on the bar. He’s clearly flustered and struggles on his German giants. Finishes strongly. Even though he missed his hand, he still gets a 14.9

Danell Leyva on PB:  Front uprise straddle cut backwards to handstand. Basket full. Leg separation. Peach to handstand on one rail. Goes for it, but I don’t know if he will get the one second hold. Walks hands back.  Basket 3/4 to one rail. 1/4 turn. Giant with 5/4 turn. 1/4 turn. Giant full (or Giant Diamadov–however you want to call it). Giant. Stutz. Front uprise to double tuck forward. Launches it way forward but still has a good landing. Little hop on the landing. 14.850

Jordan Valdez on HB: Misses his hand on his stretched Tkatchev and still manages to do a one-armed giant. Misses his hand on another release and does a crazy monkey swing around the bar. And he’s off this time. If this makes it on the web, you have to watch it. It’s crazy. 13.150

Eddie Penev on PB: Didn’t see much of the routine because I was distracted by Jordan on high bar, but from what I saw, there was a lot of muscling, especially on his opening basket to handstand. 14.0

Adrian de los Angeles on PH: Stays on the pommel horse. Pretty good lines, and he has one really, really long routine. Most gymnasts want to get on and get off, but not this guy.  13.3

Luke Stannard on HB: Yamawaki. A little sideways on his Quast and his Rybalko. Nice high stretched Jaeger–nice to see a Jaeger–he might be the only one performing a Jaeger. Has to really fight to get to the handstand after that. Collapses on his half pirouette, but somehow pulls a giant out of it. What is with these Illinois boys?! They will NOT come off the bar! Tucked double double to finish. 11.750–Low score but you have to admire his tenacity.

And that concludes day 2 of competition! Now we wait for the awards.

Tim Daggett and Jonathan Horton are handing out the awards.

Akash Modi, Brandon Wynn (who was absent this weekend), and Glenn Ishino have the three wildcard spots.