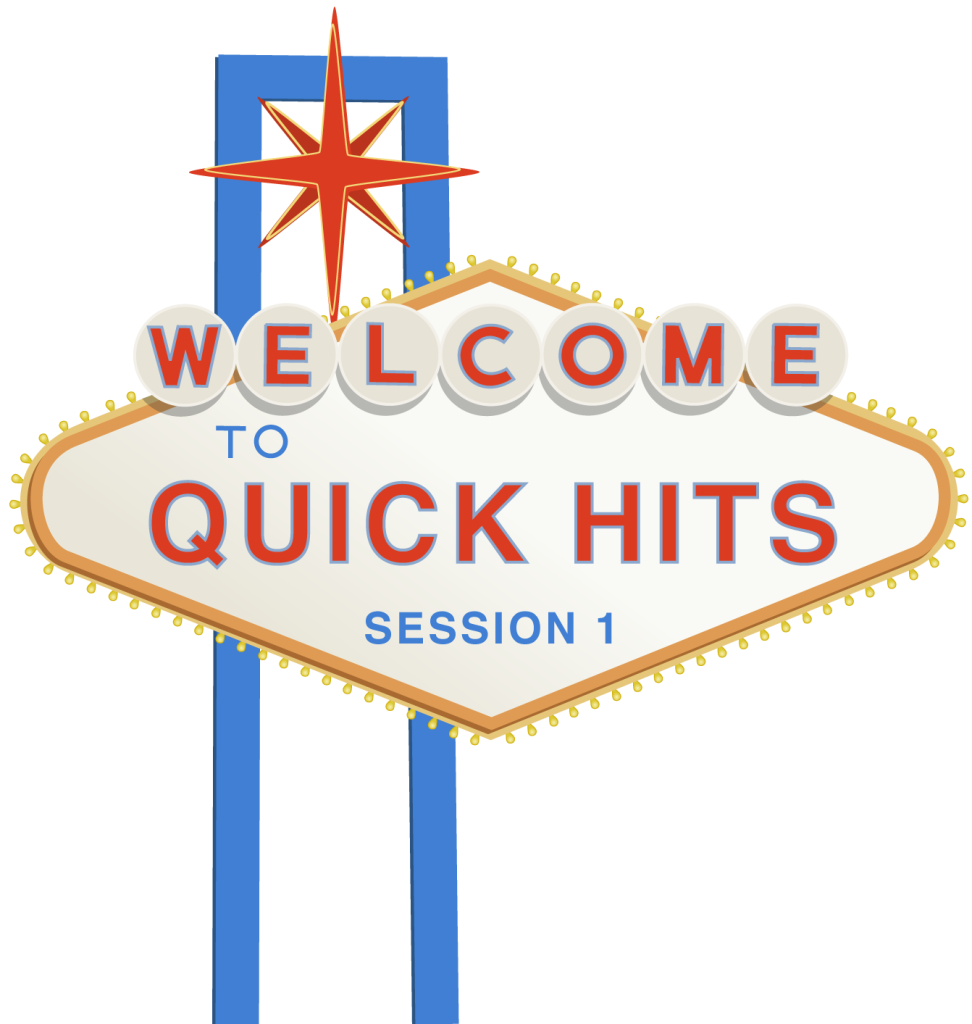 LAS VEGAS, NV – Welcome to Vegas, Gymternet! The men are currently warming up, so let’s take a moment to cover the basics about this competition.

Notable names in this session:

Hartville on FX: Back 1.5 to front double (Fall); Korobchynski; Wide-arm press handstand; Arabian double tuck; Short on his triple and a big hop forward on the landing.

Bobby Baker on VT: Kasamatsu 1.5; A little form in the air and a hop on the landing

Barrus on VT: Yurchenko 1.5 with a hop forward on the landing

Emyre Cole on FX: This kid has some ups!!! Arabian double pike; Stretched Arabian to punch Barani on straight away; Double full side pass–chest low; Full-twisting double tuck dismount. (The score will be low because it is not a really hard routine, but we’re talking Simone Biles hops!)

Trevor Howard on VT: Nice block off the table for his Kasamatsu 1.5. Big step on the landing.

Danell Leyva on HB: Kasamatsu full; little step on the landing. Probably a good move not to go for the extra half twist.

Yul Moldauer on HB: Yamawaki; Adler 1/1 with a bit of form; Repeats the element; Kovacs–knees together; Big pop on the Rybalko, but shoulders give out a bit and does more of a hop 1.25; Fights through an Endo; Quast (Hop full); Only does his full-twisting double layout instead of his triple-twisting double layout. Bummer!

Powarzynski on PB: Peach to handstand; Giant to handstand; Back toss with 1/4 turn to single rail; Moy to hands; Stutz, Straddle cut; Double pike goes way up in the air, but not a lot of rotation; Lands with chest down

Maestas on FX: Double-double to open; Front double to punch front full; sneaks the front full to his feet. Back 2.5 to Barani; Nice Korobchynski (stretched Thomas); Full-twisting double tuck to finish with a hop back

Chris Brooks on PH: Stayed on, but didn’t see the entire routine, as CJ Maestas was competing at the same time.

Chandler Eggleston on FX: Front double full to a really low Barani; almost gave himself a hair cut; Double-double as second pass; Back 2.5 to punch front full; Split to press handstand; Korobchynski (Stretched Thomas); Back 1.5 to Rudi; Triple twist with a hop to finish. (Bummed that he got nixed his double Arabian punch front full)

Kevin Wolting on SR: Troubles on his uprise to straddle planche; Legs came down and then back up; Double back with 1.5 twists to finish.

Alex Naddour on PH: Bwd scissors to handstand; Flairs up to handstand; Flop work; And he’s off doing a loop on the end on pommel horse; Magyar on the end; Legs come apart on his Wu; And he’s off again! OH NOES! (Insert Alexander and the Terrible, Horrible, No Good, Very Bad Day reference here) Finishes the routine with travel down; travel back and handstand pirouettes off.

Bailey on VT: Kasamatsu full; chest low on the landing

Chris Brooks on SR: Uprise to planche; Maltese with shoulders a little high; Kip through to Maltese;Yamawaki; Jonasson (Double pike between rings); Past handstand and muscles it back; Double back with 1.5 to finish; General consensus around me: Brooks is even more beefier than he was in 2012.

Lots of guys wearing shoes on floor. I wonder if they have sweaty feet like Terin Humphrey.

Ellis Mannon: Back 1.5 to Barani; Really long flair sequence; Manna–not quite all the way parallel to the floor; Arabian pike in the straight away (Single Arabian–not a double; He’s not Denis Ablyazin, and his ankles probably feel much better.) Back 2.5 to finish.

Bower on FX: Big Full-in to open; Back 2.5 to a Barani; He got NO bounce into the Barani; I doubt that there was a dead spot in the floor, but that’s kind of what it looked like; Arabian to punch front full; Back double full; Back 1.5 to front layout; Man wipe into a shoulder shrug before his double Arabian dismount; Big squat; He’s got some quads of steel

Chris Brooks on VT: Doesn’t through the Blanik; Just a handspring double front with a nice cowboy and a bit of a hop on the landing;

Danell Leyva on HB: Yin Alvarez is staring down the judges, as they are taking a long time to score the previous routine; A few Yin claps before the routine; Adler 1/1; Lots of height on the Yamawaki; Misses his stretched Kovacs and hits the mat hard; Ugh, I have a headache just thinking about it; Gets back up; Repeats the skill, Misses his right grip and he’s off again.

Ellis Mannon on PH: His flairs are LOVELY! More of this, please!

Danell Leyva on HB: The third time is the charm; Kolman; barely gets right hand on the bar; Kind of crazy flegs on his Stalder 1.5; Yin yells, “YESSOOOOOOO!” as Danell does his double-double dismount

CJ Maestas on SR: Maltese to start; lowers to cross; Uprise to inverted cross; A little high; Yamawaki (Double front) to Jonasson (double front pike) to uprise to Maltese; Uprise to planche; Tucked double double to finish–looks like he took a step on the landing

Van Wicklen on FX: Whip 1/2 to front 2/1. Back 2.5 to Barani; Back 1.5 to front full; Left split to press handstand; Korobchynski; Double full side pass;  BIIIIG man wipe; Double Arabian to end; hop on the landing;

I think that Van Wicklen has the prettiest roundoff back handspring in the competition.

Bobby Baker on HB: Endo to Endo 1/1; Yamawaki; He’s a big fan of one-armed giants; Quast (hop full); Weiler kip; Launches his triple back waaaaaay out and safety rolls forward out of it; Gah! His dismount was Trent-Dimas awesome in warmups!

Danell Leyva on FX: Double-double layout; Step; Tamayo; Thomas (Back 1.5 with 1.5 twists); Manna–not quite all the way to parallel; Front full to Rudi; Whip to back 2.5 to tuck barani; Yin clap before the final pass; Double layout dismount and Yin is yelling and running before he even takes off for the double layout

CJ Maestas on VT: Yurchenko 2/1 with a hop back

Fred Hartville on VT: Fall on his Shewfelt (Yurchenko 2.5)

Trevor Howard on FX: Tamayo with a bit of bent knees; Layout to front double pike; Back 2.5 to front full; Little off direction; Korobchynski (but major pike); Wide-arm press handstand; Front double full to Barani; Barely made the front double full around; Stuck double Arabian in a deep squat

Langenstein on FX: Tamayo with a bit of form; Whip to double Arabian; step on the landing; Wide-arm press handstand; Falls on his front layout to double front; Back 2.5; Double layout; Knees close to his face on that landing;

Danell Leyva on PH: And he’s off;

CJ Maestas on PB: Falls on his double front dismount; and gets up grabbing his wrist!

That was a really rough patch there! Three falls happening simultaneously! Gym gods, what are you doing to us?

Ellis Mannon: Yurchenko double; steps off to the side onto the extra crash mats

Bobby Baker on PH: He’s off, too! The pommel horse is a man eater today!

Yul Moldauer on VT: Came onto the table awkwardly on his Yurchenko and does a layout off; He does NOT look happy, and neither does his coach.

Cameron Bock on VT: A little short on his Kasamatsu double; Good that he put the vault to his feet; He looked really bummed heading into this rotation; He fell on his rings dismount.

Ellsworth on FX: A lovely double layout to open! A fair number of the youngsters are doing double layouts! Nice to see something besides an Arabian

Brooks on HB: Yamawaki 1/2; Adler 1/2 to stretched Tkatchev; Adler 1/1 to Yamawaki; Stalder 1/1 and back down (The whirly twirly skill that was so popular among the Chinese at the Universiade); Double-double layout to finish

Dalton on SR: Kip through to Maltese; Press to planche; Azarian roll to cross (good level); Jonasson with knees bent a bit to Yamawaki to Maltese; Planche; Tucked double double with a hop on the landing;

CJ Maestas has his grips on! It looks like he will be fine after his p-bar dismount!

Danell Leyva and Chris Brooks are tied right now with a 71.400 in the all-around. It’s Vegas, so cast your bets now!

Bernardini on VT: Kasamatsu full; Little shuffle on the landing

Robin on VT: Kasamatsu 1.5; Lots of fist pumping going on after that vault! (Opinion: I prefer the MAG college fist pump to the WAG college screech.)

Joey Peters on HB: Yamawaki to begin; Adler 1/2; Kovacs — a little too close to the bar; has to take an extra swing; double double layout to his knees. Bummer.

Bobby Baker on SR: Another triple! This one went much better than the one on high bar!

Powarzynski on VT: Really low landing on his Kasamatsu double, but his feet don’t move!

CJ Maestas on HB: Clips his feet on his Yamawaki; and then he’s super close to the bar on his stretched double double; EEK!

Trevor Howard on SR: Maltese; Nakayama to cross; Yamwaki; Jonasson; Uprise to cross; Uprise to handstand; Tucked double double with a step on the landing;

Danell Leyva on SR: Yin clap to start the routine; kip to a Maltese that was at like a 45-degree angle; Jonasson to Yamawaki; Whip-it cross with a little swing to the side; Uprise to straddle planche; Straddle L; Press to handstand; Front giant; Back giant with a little sag in the arms; Full-twisting double layout with a step on the landing

Chris Brooks has an 85.800; Waiting on Danell’s score now

And Chris Brooks comes out on top!

Colin Van Wicklen, the guy who has perhaps the prettiest roundoff backhandspring in the competition! 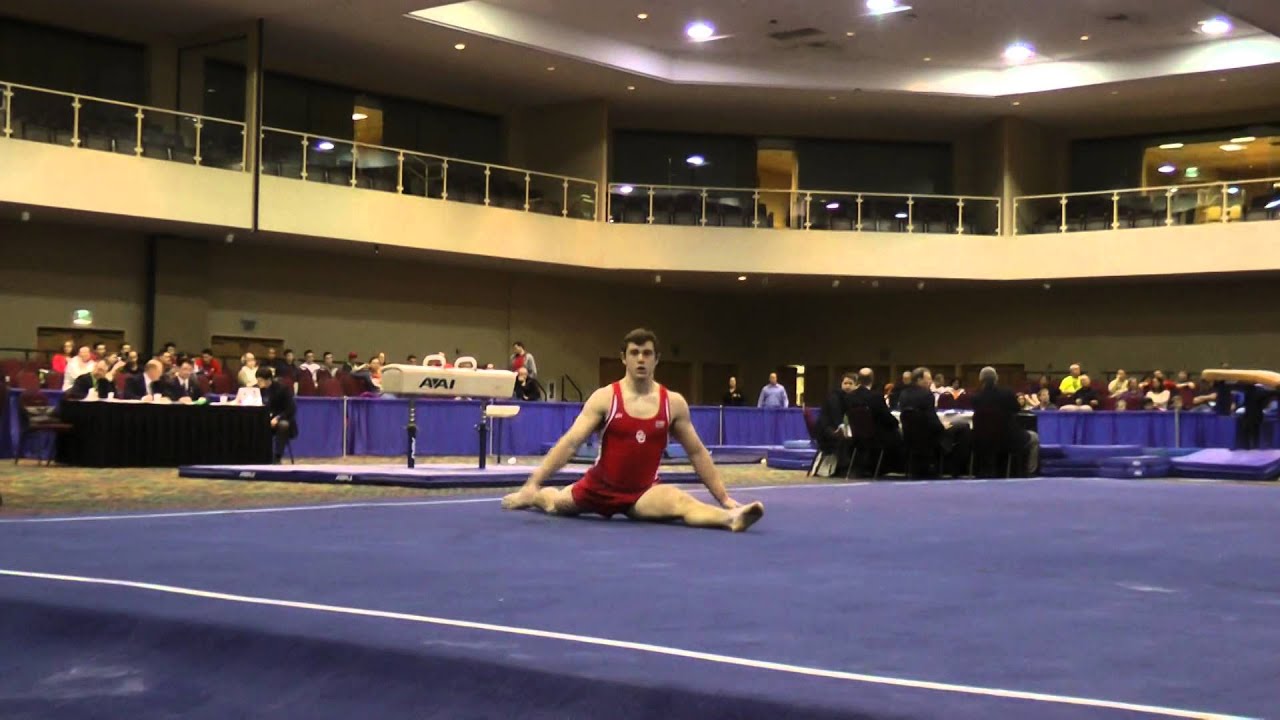 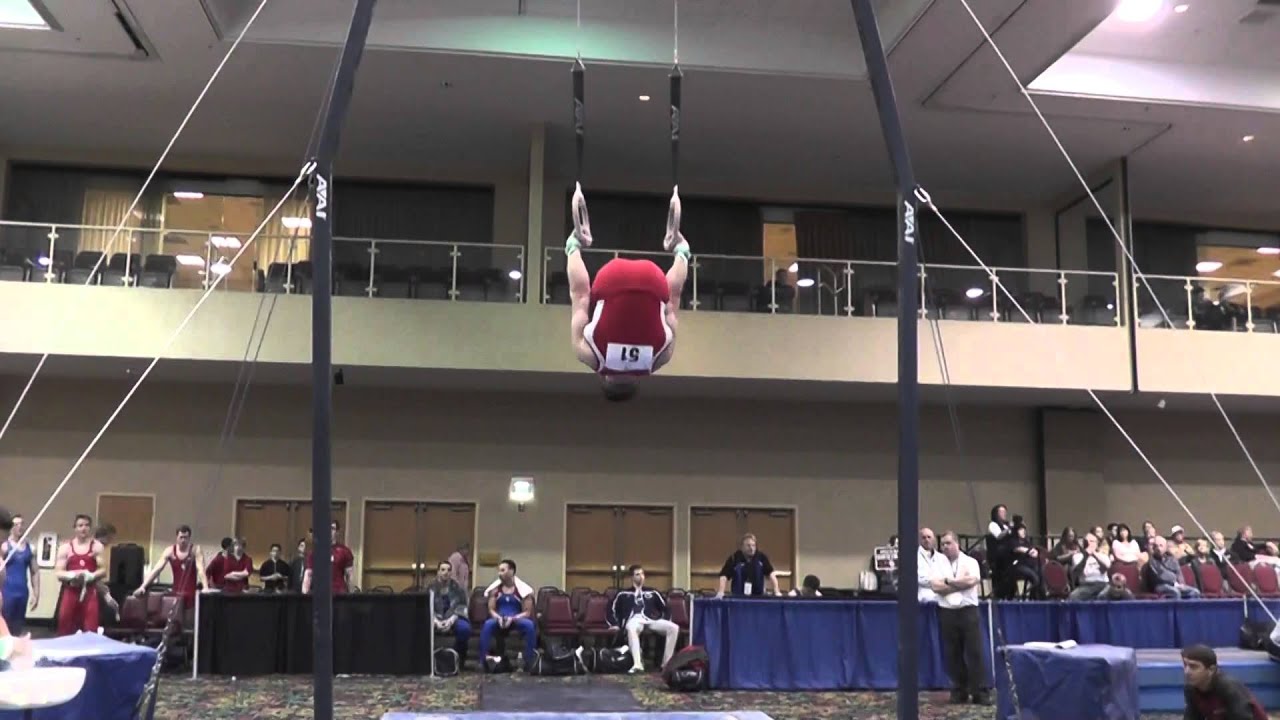 We’re pretty sure that Illini Fred Hartville was the 2013 NCAA Vault Champion, not Alec Robin.

Thanks for the correction!

Wow, that Colin guy is a total Kristian Thomas look-a-like …