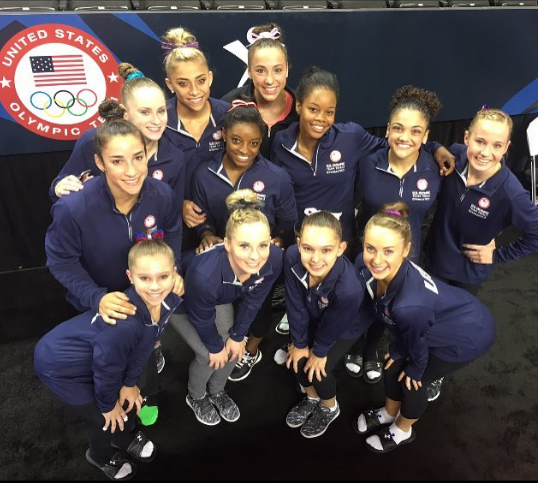 The podcast being recapped here was recorded with new mics. Big thank you to Club Gym Nerd members for helping us buy them! Now, take a look at the most important moments from night one.

1. Spotted: Kittia Carpenter on a street corner in San Jose despite rumors she had been fired and was home in Ohio. Quickly, Gabby’s mother spoke up, offering a perspective that didn’t sit well with the gymnastics public:

Gabrielle hasn’t made a coaching change. Christian Gallardo has been Gabrielle’s coach since she arrived at Buckeye. Since there is only to be one coach alongside Gabrielle throughout the Olympic process, Christian is that coach based on their longtime coach/athlete bond, chemistry and strength together.

Some questions were raised: Can’t you have more than one coach on the floor (like Skinner and Kocian)? And, if Gabby needs a spot at Trials, is she really ready to be doing that skill?

2. Night one was a competition for alternate spots. Because with a conspicuously pre-selected team, a sub-par performance at one meet doesn’t really make a difference in the standings. E.g. Carly. And Carly.

3. The biggest takeaway for each competitor from night one:

4. Overall, this year’s team seems more pre-determined than years past.

5. The judging tonight was largely inaccurate, and the meet came off more like the Olympic Gala than the Olympic Trials.

And finally, some thought-provoking questions we couldn’t help but ask:

What was your biggest takeaway from night one of Trials?