After the disappointment that was day one, I went in to this meet with much lower expectations. Like on the first day, I got to Stabler Arena 2 hours before the start of the event for the meet and greet. This time there were many more VIPs, the food was worse, and many of the athletes didn’t even bother to stop by to say “hi”, take pictures, or sign autographs like they had the first day. Instead of John Orozco greeting us and facilitating meet-ups between fans and gymnasts, there were a few staff who were sadly not too helpful. I was able to get a few additional pictures and autographs though, and in a surprise move Tarah Paige and Maddy Curley from 2006’s movie Stick It were there.

I watched more of the warm-ups on the second day than the first, and while the difficulty level did seem higher I didn’t want to get my hopes up. I was surprised to see John Orozco warming up on Parallel Bars, as well as High Bar, though he was wearing a knee brace. I did get some video of him warming up on parallel bars, you can see it here: https://www.youtube.com/watch?v=TpLHT0G6mB4

*Note: On the second day I was sitting near a group of people who are the classic 4-year fans, they got tickets through a seat filling membership. I was able to get a few quotes for their take for the first few events before they left. Impressions: 3/10

A quick recap on how things worked: The team on the “offense” would put up an athlete to compete a skill or series, the team on the “defense” would then send someone to do that same skill. The judges would pick which athlete did it better and that athlete’s team would be on the “offense.” The first match-up offense/defense was decided by a stick-off (night one it was just standing back tucks, night two the difficulty increased after each stick: back tuck → back pike → back layout, etc.) On night two the first team to 6 points won the rotation. 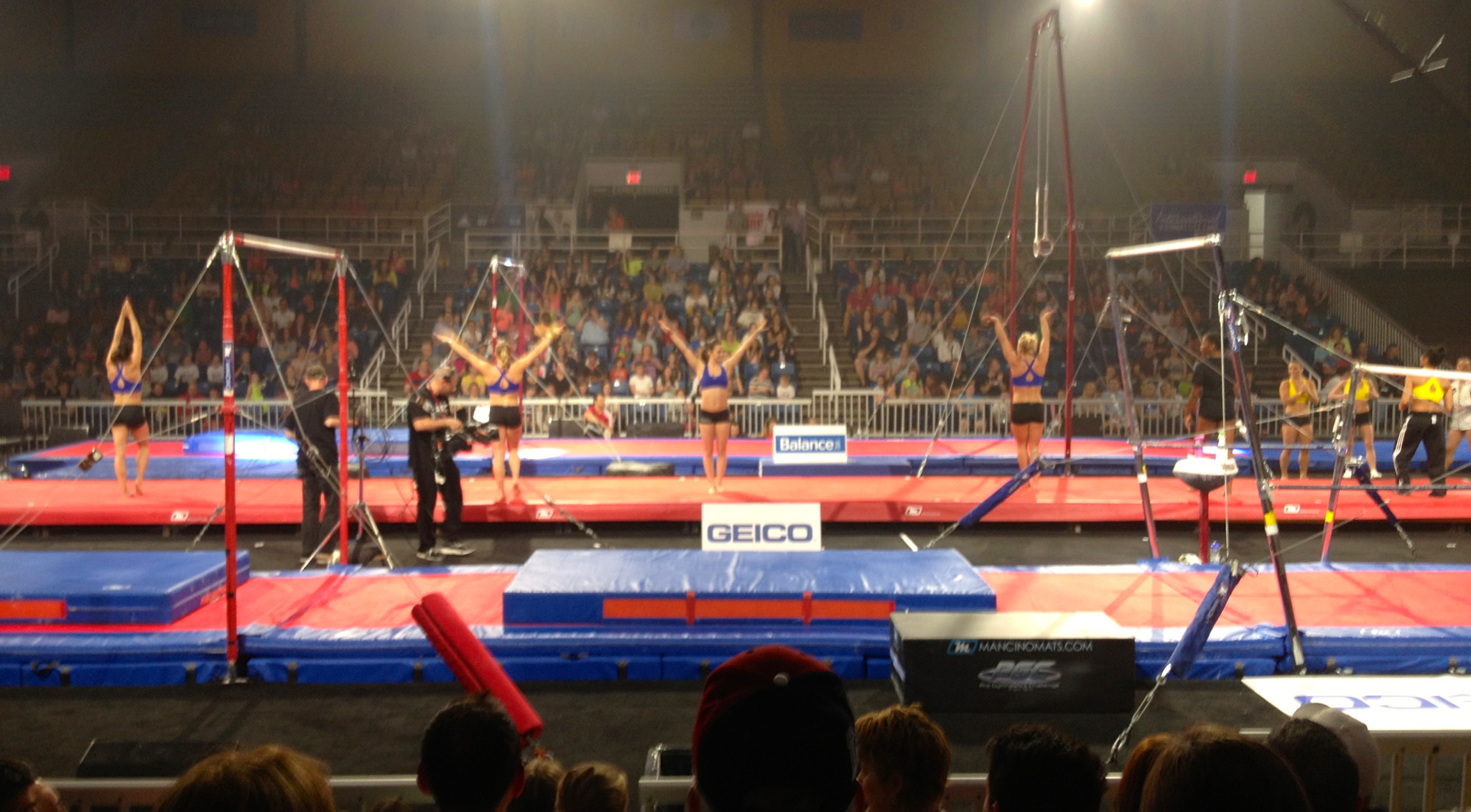 The start of the meet was a bit bumpy, after quickly saying how the meet was going to work the announcers started calling in the gymnasts one at a time. After only a few athletes had been named, BOOM, the power went. Back up lights came on fairly fast, but we had to sit and wait for the TV crews to have everything in order. So much for starting on time. After waiting for a bit, some of the gymnasts hopped on to the podium and started to recreate the flash mob from NCAA nationals. The crowd seemed confused at first, but got really into it. A group of the guys went up next and did the Party Rock number from the Kelloggs’ Tour with Nastia and Chellsie joining in. Some more waiting and a few handstand competitions later (including one between the male coaches!) the tv people gave the all clear and the competition got under way.

As with the previous night, the first rotation was Tumbling. Passes included an arabian double layout (Paul Ruggeri vs. Jade Barbosa), a front layout to immediate double front pike (Josh Dixon vs, Petrix Barbosa), a tucked double double (Alyssa Pritchett vs. Sam Oldham), etc. I really enjoyed this rotation, I’m glad I finally got to see Alyssa’s double double and I was amazed to see Team World put up Jade for the response to Paul’s arabian double layout. Impression: 10/10

Mr. Four-Year-Fan’s take: “That’s what I expect of gymnastics.” He and his friends really seemed to enjoy this rotation, lots of ooohs and aaahs.

The next rotation was Parallel Bars and Uneven Bars. Skills shown included a Tanaka (Brandon Wynn vs. no one, the World Team had to forfeit the point as they didn’t have anyone willing/capable of doing it), a toe on to toe on Shaposh’ followed by a bail to handstand (Vanessa Zamarripa vs. Jessica Lopez), a peach to Tipelt with a front flip (Tommy Ramos vs. John Orozco), and several others. This rotation wasn’t as good as the previous one, with the athletes struggling to put up a good defense. As Mr. Four-Year-Fan put it “It looked hard. There were a lot of incompletes.”
Impression: 6/10

The third rotation was Vault, and while there were a bunch of Yurchenkos during the one-touch, the athletes did a good job of showing variety. Vaults shown included a handspring double front (Sam Oldham vs. Brandon Wynn), a Tsuk full (Alyssa Pritchett vs. Marissa King), and a ½ on double full off by Paul Ruggeri. The crowd really seemed to enjoy this rotation, I know I did.  Mr Four-Year-Fan: “Best so far! I like any event with a lot of air.” Impression: 9/10

The fourth rotation took us to Rings and Balance Beam. Sadly this rotation had several forfeits, but the skills shown were insane. Brandon Wynn showed a combo of a back lever pull to Maltese three times (“Oh my god, look at his muscles. That’s why his wings are so huge!” -Ms. Four-Year-Fan), Marissa King did a switch leap to ¾ Shushanova which Brie Olsen attempted and belly flopped on the beam, Tommy Ramos held an inverted Iron Cross for 15 seconds as counted by the audience, and one of the Greek athletes Eleftherios Petrounias did a back uprise to iron cross to inverted iron cross to double double layout dismount. 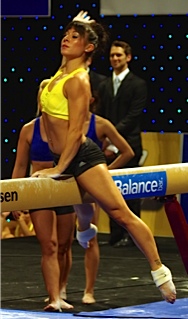 Sadly my group of Four-Year-Fans had to leave after this rotation (it was after 10pm at this point, which according to the program was when the event was scheduled to be over), so their input ends here. Impression: 9/10

Bonus: As anyone who has listened to Beam commentary can say, the announcer always mentions that beam is only four inches wide. The PGC announcer was no different, but he added, “it’s like tumbling on an iPhone!”

The next two rotations, relay Rope Climb and audience choice all around went by quickly. Initially the rope relay ended in a tie, but video playback showed the last athlete from one team touching down a split second before the other.

The Audience All-Around was also over pretty fast. Only one pair would compete on each event, doing a skill that we, the audience, had been able to pick via text message during breaks earlier in the meet. Skills included a full twisting backhandspring on Beam (Catalina vs. Shayla), a double back on parallel bars (Paul Ruggeri vs Petrix Barabosa), and an Azarian Maltese to an iron cross (Brandon Wynn vs. Eleftherios Petrounias) Impression: 6/10

The final rotation was High Bar and Single Rail. Sadly, by the time we got to this event there had been delays (including an official protest on one of the rulings) and many “commercial breaks;” not only was the audience tired but the gymnasts seemed pretty antsy. During one of the final lulls Vanessa had one of the guys lift her up to the rings where she goofed off a bit.

At this point in the competition the teams were tied up 3-3. The men clearly had more depth here, as a few of the women’s points were decided by forfeit (Brie’s deltchev and full twisting double layout, Oksana’s jam handstand to full twisting double back). The men would at least put someone up to attempt the skills (Nathan Gafuik did a ½ Takamoto to Kovacs, Steven Legendre tried). Other skills included a stalder to triple twisting double layout (Petrix Barbosa vs Jake Dalton), and a double front half out (Laura-Ann Chong vs. Alina Weinstein). Impression: 8/10

The event finally ended sometime after 11pm, well over an hour later than scheduled. Hundreds of people then stood in line for autographs, myself included as I hadn’t managed to get everyone during the VIP meet and greets. I wasn’t too far back in line, yet I still didn’t make it to my car until after 12:30am. While the gymnastics itself was pretty great tonight, especially when compared to night one, the delays were a huge problem. I think this will be a fun event to watch on ESPN, but unless you’re very patient and ok with a numb backside sitting through it was more than a little tough.

I did have the opportunity to talk with some fellow hardcore gymnastics fans, who had many of the same concerns I did (length, skill level, disorganized, hard time identifying some of the athletes, etc.). One woman, Mandi, who has been attending meets for more than 25 years pointed out that unlike many other competitions the audience didn’t seem very “gymnastics educated.” There was a visible lack of gymnastics club groups, usually easily identified by their matching t-shirts at other meets. Given that Allentown is known for gymnastics thanks in no small part to Parkettes, there really was no excuse. When it came to picking skills for the Audience All Around the skill that sounded most impressive tended to win regardless of whether it was a cooler/harder skill than the other option.

Mandi had had an opportunity to talk to one athlete after the first night who upon being congratulated on a good meet said “Why? We didn’t do anything!” I expected more difficulty given that the equipment wasn’t standard mats but rod floors and foam covered resi, also the athletes didn’t have to compete many events or even two nights in a row on the same event.

My final thoughts: I don’t think I would go to another PGC in person for a while. I loved the gymnastics of day two, but I don’t think it was worth all the waiting we had to do between and during rotations. Given that the meet is tape delayed I see no reason they can’t remove the pauses for commercial breaks to help speed things along. They should also have things planned to fill the down time, whether it’s choreographed routines for the gymnasts to show off, special acts from locals, or even fluff pieces on the athletes actually competing. For example, I would love to know more about the gorgeous and talented Petrix Barbosa for instance, he was definitely on the shortlist for his teams’ M.V.P. on both days. I can’t wait to see more from him!

Read Emma’s review of  Day One of the PGC and check our even more pictures on her blog:  ImPressToHandstand.blogspot.com. If you have any questions, just tweet her @PressHandstand.