October: Almost unthinkably, Romania does not qualify for the Team Final at Worlds. Finishing in 13th with a 217.220, they are over five points below the Netherlands, who grabbed the 8th and final spot in the Team Final. 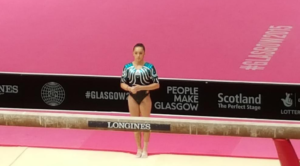 Heightening the stakes of an already pressure-filled situation is the storied past of Romanian gymnastics, including Nadia, one of the modern mothers of the sport. Romanian gymnasts have competed at every Olympics since 1952, with the exception of the 1968 Games, and have medaled as a team at every Olympics since 1976. Three times they have won gold.

At the Test Event, they will need to finish in the top four to earn their spot at the Olympics.

December: A handful of changes befall Romanian gymnastics. Lacramioara and Cristian Moldovan resign as coaches, leading Mariana Bitang and Octavian Bellu to come out of retirement to return as the team’s coaches. Additionally, the team moved from Izvorani to Bucharest.

March: Larisa Iordache is injured and will not be able to compete at the Test Event, weakening Romania’s chances of qualification. Andreea Iridon will also miss competition due to injury. Catalina Ponor has recently started training again after recovering from an injury of her own. Even Romanian fans are unsure of their team’s chances.

April: This time, it’s real. Romania finishes 7th of eight teams at the Test Event and, according to the Olympic qualification process, does not qualify to the Olympics. Adrian Stoica, president of the Romanian Gymnastics Federation, comments:

I can not give statements now, I must clear my mind after what happened. The girls, this is how much they trained, this is what they showed. They missed.

If a scapegoat is really wanted, I’m offering myself. No matter how you look at the situation, still Bellu and Bitang are guilty.

In an open letter to the Romanian gymnasts, Paul Ziert, publisher of International Gymnastics Magazine, decries the system for these results, and not the gymnasts themselves. He writes:

I don’t think it was your fault at all. You were simply pawns in a very ugly game of power and egos.

Needless to say, fans were shocked.

Romania didn’t qualify a women’s gymnastics team for #Rio2016, despite having medaled in every Olympics since 1976. This breaks my heart.

May: Still, Romania has an individual spot for the Olympics, likely to go to Iordache or Ponor. In yet another twist, Iordache’s most recent surgery does not go as expected and she requires further surgery. This means that Ponor will be Romania’s sole competitor in Rio at her third Olympic Games.

To add to Romania’s woes, Bulimar ruptures her achilles, rendering her unable to compete at the European Championships in June.

For more insight on this story, listen to Episode 196: The Romanian Situation with Bea.

People have been less than impressed with Ponor form lately but it\’s to consider she isn\’t fully recovered yet from that leg injury, I hope she can return to London form by Rio, However I don\’t think it is likely that she will pull off a bars routine worthy of an all-around medal contention in such a short amount of time, imo she should stick to FX and BB and scrap VT too.

I think they overworked the girls due to pressure because it can\’t be common that everyone is simultaneously injured on a struck of bad luck.

On a side note, remember London qual where Ponor missed a pass on FX and made it to finals? Was that numerically logical or was there any politics involved? I remember Ferrari being really upset about not medalling and at that moment well, I thought she had a point.

Ponor as the Romanian competitor isn’t confirmed by the federation yet, and Larisa has tweeted a couple of things indicating she still intends to try for the spot. Whether she’ll have any success is dubious given how little time she has to rehab her wrist, but that statement should still probably be adjusted for the present.