How do the women qualify from P&G Championships to Olympic Trials in 2016?

How the men are chosen for the US Olympic Team

When you join the GymCastic club, you’ll get all of the following perks: 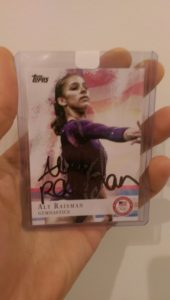 Great episode! Just FYI, the poverty line for a family of four is $24, 000. For a single person the poverty line is $12,000. Not to say that adjuncts shouldn\’t make more, but they aren\’t at poverty line. Also, it\’s just the adjuncts that make that little, who usually have other jobs; full time faculty will make at least $75k. That said, I totally agree about the backward priorities of US universities and think more of the money should be going to professors and research rather than coaches.

No one mentioned Madison Kocians back to back usage of Khorkinas floor music. Her last routine Khorkina used, and her new routine, is also music Khorkina used. Is this just a coincidence? lol

Oklahoma, like many sports-centric schools, don\’t use state funds to pay their coaches; it\’s all from outside funding. Florida is another one who does the same, but unlike Oklahoma doesn\’t regularly publish their coaching salaries (they run Athletic Department as separate entity from U), outside of football. The last published salary I could find for Rhona Faehn was roughly $150,000, but this was back in 2012-13.

And, don\’t forget, coaches receive bonus for success. That first National Championship for Faehn, she received a $46,309 bonus, according to the Tampa Bay Times. Kindler last year received a $75,000 bonus for finishing second and winning Big 12s. Safe to assume she got even more this year for the National Champ.

To contrast, Miss Val makes a comparatively shameful $172,000 at UCLA, where the cost of living is much higher. That\’s less than Danna Durante in Georgia, with zero national championships, who made $177,000 in 2015.

It\’s crazy to me that Val isn\’t the highest paid NCAA coach. If you combine her years of service, her number of championships, and the cost of living in LA- she should be.

I assume that $172k probably doesn\’t include other benefits. They probably pay for all her living expenses, primo health insurance plan, etc, in addition to her salary, I would think.

Ha, ha.. No. No coach\’s salary includes \”living expenses\” … That\’s what the money is for. Some (most?) do get cars to drive. There is often a good bit of apparel from whatever sportswear/shoe company the school is sponsored by. Sometimes there are golf memberships or similar perks. Heck, some top-level college coaches (read: football, not gymnastics) get personal use of a private plane, etc. This is a good article (http://www.newsday.com/sports/college/college-football/fbs-college-football-coaches-salaries-are-perks-are-soaring-newsday-special-report-1.9461669) about the perks college football coaches get in their contract.

Of course there are always insurance and retirement benefits. And, yes, the salary numbers don\’t include any of this for Val, or any of the others. But, yeah, I don\’t even know of any football coaches that gets \”living expenses.\” You will see sometimes where a school will buy a football coach\’s house in their former town as incentive to get them, or in the town they are now to make it easier for them to leave. But that\’s a temporary stopgap where the school then bears the burden of the house until it sells, rather than the coach, personally. (Well, realistically it\’s usually big donors who pick up this tab,) But I\’ve never seen even the juiciest, perk-filled football coaching contract that buys them a house to live in.

I understand Zac Lawson has opened up shop again in the same building using a different business name.

A video/image of Patrick Jay Wehrung.

This website uses cookies to improve your experience while you navigate through the website. Out of these cookies, the cookies that are categorized as necessary are stored on your browser as they are essential for the working of basic functionalities of the website. We also use third-party cookies that help us analyze and understand how you use this website. These cookies will be stored in your browser only with your consent. You also have the option to opt-out of these cookies. But opting out of some of these cookies may have an effect on your browsing experience.
Necessary Always Enabled
Necessary cookies are absolutely essential for the website to function properly. This category only includes cookies that ensures basic functionalities and security features of the website. These cookies do not store any personal information.
Non-necessary
Any cookies that may not be particularly necessary for the website to function and is used specifically to collect user personal data via analytics, ads, other embedded contents are termed as non-necessary cookies. It is mandatory to procure user consent prior to running these cookies on your website.
SAVE & ACCEPT
wpDiscuz
11
0
Would love your thoughts, please comment.x
()
x
| Reply