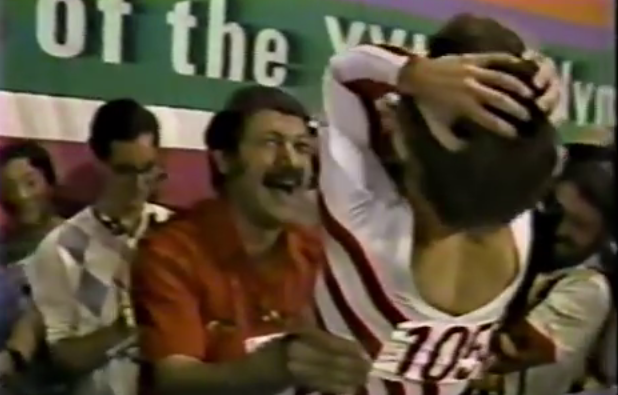 This week’s episode is commissioned by Club Gym Nerd member Beth, who commissioned a sequel to our first show all about the biggest myths, legends, and unexpected moments in gymnastics history because there were just too many to pack into a single episode the first time around. Thank you for letting us do this, Beth!

Whether a gymnast from birth or starting at age 50, a handstand is something most gymnastics enthusiasts have at least tried. Send in your story of a funny or embarrassing handstand moment (the more embarrassing the better), and you could win a $200 Tumbl Trak gift certificate!

When you talk about pregnancy doping can you please remember that, if this did happen, it was almost certainly not done with the fulsome consent of the gymnast or gymnasts concerned, so in effect was a form of abuse.
Furthermore don’t forget that as we saw with Gutsu’s appearance on Russian TV, it is very difficult for victims to speak out, and for the generation involved in this unproved allegation quite possibly dangerous. Tatiana probably would not have spoken out if she were still resident in Ukraine.
We shouldn’t speculate until we know that we are not potentially victim hurting. Russia is not the USA and people suffer because of the outdated attitudes there which we will not see change in the near future.
Until one of the victims volunteers her story we cannot kindly and ethically say anything helpful

Link to the 1980 stuff? Friendship games, I think?

I think we need a whole episode on the legends about Bela. can someone explain the \’pregnant spiders\’ comment?!

I think this was the nickname he gave Betty Okino, implying that she had a fat stomach :/

I listen to you guys religiously – AND – cringe when you gloss over some of the basic basic greats prior to 1992. For example – “the gymnast who’s toe tape came off” is none other than Soviet world champion and twisting dive-role goddess OKSANA OMILIANTCHIK (at USA vs USSR in the yellow leotard to Ballet Russe but that’s besides the point).

If listeners don’t know who she is – they should!!! It’s not like she’s from the ’60s with beehive hair doing belly beats on UB. She matters!!! SAY HER NAME!!

OMG, I\’d love an episode on the 1980 games and the epic Shushunova/Silivas showdown.

I loved this podcast! So many crazy things behind the scenes in gymnastics that there’s bound to be rumor mills and hyperbole (especially with the crazy NBC fluffs :). That’s an interesting tidbit about the “Miller” skill. Figures that Nunno would try to submit it himself when Peggy was Shannon’s beam coach. It would explain why she didn’t get a decent start value in the 2000 trials if the element technically didn’t exist in the COP.

Peggy did say in an interview a few years ago that she had to “cheat” the Miller skill a bit in 1996 because of her wrist injury. She still managed the skill fine but just had to change how she adjusted her hand placements on the handstand pirouette. She even admitted that Shannon couldn’t even practice the skill because of the pain in her wrist, so she only threw it in competition at the Olympics.

I wonder why the “Onodi” skill on beam wasn’t ever named for Mostepanova, the gymnast who did it first? If the Soviets had competed in 1984 at the Olympics would they have submitted the skill? Or maybe they figured she had ample difficulty in her routine already so it wasn’t necessary.

Interestingly the “Phelps” vault would have been called the “Miller” had Shannon successfully landed it in the EF in 1994 worlds. Since she sat it down she didn’t get the credit, and later that year Jaycie did it at the team worlds in Dortmund. I thought Shannon was going to debut the hop-full in the 1992 Paris worlds but then didn’t because of her withdrawal due to her elbow injury. Though if Oksana did compete it already in 1991 it’s a moot point.

I wish they would bring back some of the original names of skills. It seems a shame that there were so many innovations in the 80’s and 90’s and only a small number of those skills bare their namesake in today’s COP.

The insanity of Moceanu’s back story is so difficult to grasp. How she didn’t have a mental breakdown in those years before the 2000 Olympics is beyond me. Such a tough girl! A pity she got injured in 2000. As she was a strong beam/vault athlete she would have fit that team like a glove.

Okay, Jessica, I feel like you\’re thinking wrong about the Asians getting punished for underage competitors. I don\’t think FIG wants to punish anybody, and I feel like they wouldn\’t have punished the gymnasts/teams they did if the gymnasts/federations their hands hadn\’t been forced. Let\’s face it – changing ages, gymnasts telling them they\’re too young, or being the same age more than one year are pretty hard to ignore. In virtually every other case – including Yang Yun and the 2008 Chinese – it seems FIG has made virtually no effort to look into allegations of falsification.