279: A Diva Is Magical: The Svetlana Khorkina Episode (Commissioned) 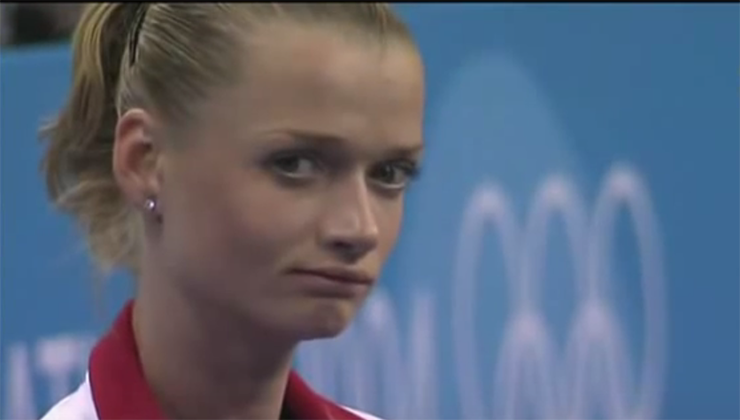 This week’s episode was commissioned by Club Gym Nerd member Bella, who asked for an episode about all things Svetlana Khorkina: the good, the bad, and the ugly.

You forgot to mention her layout full ON THE FREACKING BEAM. Even though she only hit it once it’s still the most insane skill ever performed on the beam.

The reason both Chow and Khorkina got the stalder 1 1/2 named after them is because the skills were finished in different grips – Chow in mixed grip, and Khorkina in under grip. Back then, the COP did distinguish between the two.

Pleaseeeeeeee find a clip of Spencer’s favorite meltdown moment of the flopping dying on the side of the floor. this sounds incredible and I must see it.

Oh, Sveta. She’s still to this day probably one of the most provocative gymnasts to ever compete. It’s interesting that her body type was so atypical for most gymnasts yet she had such amazing longevity in her career. I know her coach adapted her training so she didn’t have to do as many repetitions, so I wonder if that attributed to her staying relatively healthy in the sport for so long.

I remember that World Cup where Khorkina laughed at Zamo, though it wasn’t quite as rude as it looked. It was a weird format where the top two gymnasts would duke it out to see who would win. Khorkina went up first and completely blew her routine, so she figured her shot was gone. But then when Zamo also blew her routine she couldn’t help but burst out laughing at the absurdity of it all.

Remember her outburst at the team final in Sydney, after she did beam? All of the other team members went up to congratulate her and she snapped at them and said “Why are you following me? Leave me alone.” Then NBC was mystified at why her teammates didn’t go up to her after her floor routine in the next rotation. I thought it was pretty ironic that she was upset with them for falling on beam when she herself had fallen on bars, and in 1999 it was her falls on vault and beam that cost them the team world title.

Even though her lack of sportsmanship bothers me a bit, I still feel horrible for what she went through in that all-around final in Sydney. It was definitely hers to lose, and to have such an egregious error with the equipment is unforgivable. She said her coach could hear her crying in her room all night.

Anyway, love her or hate her she is still one of the most remarkable gymnasts of all time. So many innovations and original skills that she brought to her routines, and no one played to the crowd like Sveta. In an era where most gymnasts were emotionless gym-bots she brought passion and effusiveness to everything she did. The Sydney games alone would have been a snoozefest without her 🙂

Even though it wasn’t mentioned, I’m a big fan of her 2000 FX Routine. It was just so beautiful…and something that I don’t feel any other gymnast at the Olympics could pull off!