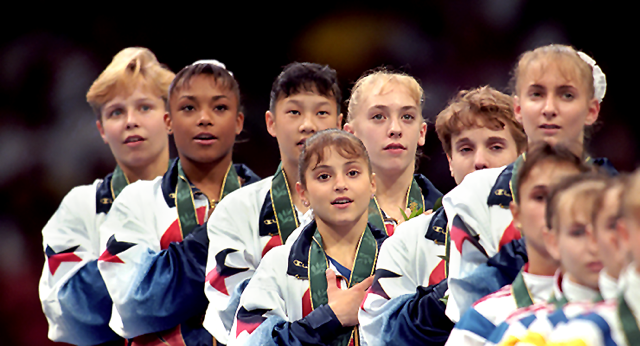 This week, we have another very special commissioned episode for you to sink your ears into. Loyal Club Gym Nerd member Robin helped support the show by asking us to talk about everyone’s favorite competition, the meet that launched a million gym nerds, and probably the most important moment in the entire history of sports, the 1996 OLYMPIC WOMEN’S TEAM FINAL! Thank you so much, Robin!

WHAT: A GymCastic crystal logo leotard, custom made to fit by Rebecca’s Moms Leotards

HOW TO ENTER: Tell us who would you want to compete against in your custom-made GymCastic leo. Tag @GymCasitc and @RebeccasMomLeo on Twitter or  Instagram

Season 21, Episode 7: Celery Beam LISTEN WATCH Club Gym Nerd members can watch the podcast being recorded and see video clips of the gymnastics while we discuss.Please login to your Club Gym Nerd account to listen and/or watch this episode. Not a...

LISTEN WATCH Club Gym Nerd members can watch the podcast being recorded and see video clips of the gymnastics while we discuss. Gym Nerd School videos are available to everyone because education if a fundamental human right for crying out loud. If you'd like to...