In June, 2013 the Belarusian Swan graced us with her presence. Svetlana Boginskaya (Boguinskaia) is a 14-time Olympic and World medalist and is as elegant as she is fierce. This is a woman who is not afraid to speak her mind! Bogi gives us the scoop on: Alexander Alexandrov and why he left Russia, what happened at Round Lake when the USSR collapsed, the real story behind her snub of Kim Zmeskal at the 1991 World Championships, the politics behind Natalia Kalinina being left off of the Barcelona Olympic team, what makes her gymnastics camp different, why she thinks she isn’t artistic, dating as a teen gymnast in Moscow, her Bolshoi choreography, her favorite routines, coaching Oksana Chusovitina in 2013, and why raising kids is harder than doing a sixth Olympics or trying to understand Bela Karolyi‘s english. Check out the videos below for the background.

Follow her on Instagram under the username “Svetlanaboguinskaia”, check out the schedule for her camp here or email her for choreography at info@ogccamp.com. If you are ever in the Houston area, make sure to visit her resturant, Mazzei’s Gourmet Pizzeria in Katy, Texas. 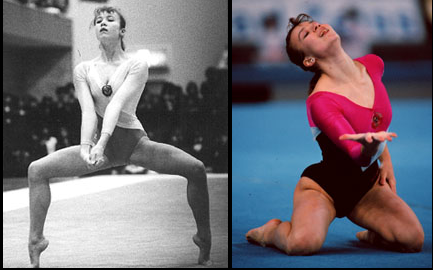 The missing member of the ’92 Unified Team: Natalia Kalinina

“I just want a can of quorn!” – Bogi’s corn spiel was golden! Love her!

This baby Svetlana floor routine is everything! She is so captivating. I think we all need to take a barre class from here and oh my god what I would give to have her be my waitress at a pizza place! I would die. Such a fun interview!