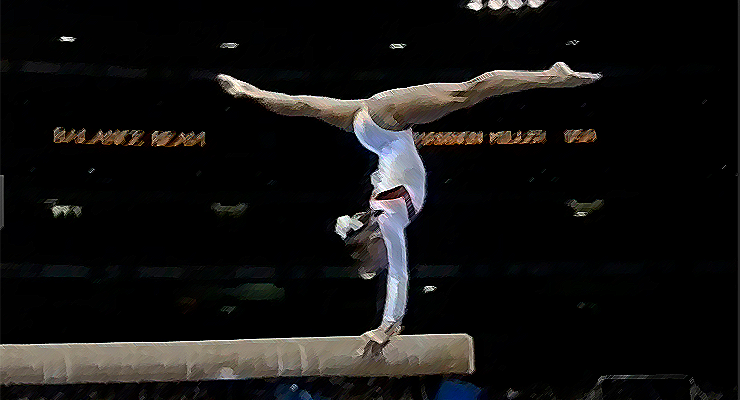 This week, we bring you the final installment in our epic 1996 Olympics TRILOGY: the event finals. This episode is brought to you by Club Gym Nerd member Kris (who also commissioned the 1996 all-around final because of legendary status—the rest of us could never), who thought it only fitting that we leave no stone unturned and no competition un-dissected when it comes to the glory and wonder and pageantry of the 1996 Olympics. Correct. Thank you for supporting the show, Kris!

You can watch the 1996 Event Finals along with us here.

WHEN: The hunt will start at 8am on Thursday August 17 and will end at 12pm on Saturday, August 19. The winner will meet with the Betty Okino at 3pm in Anaheim on August 19th! If you enter, be READY FOR BETTY because winner will meet this gymnastics legend at 3pm that day!

HOW IT WORKS: Your mission will be to complete each of the following tasks and post a photo or video to Twitter or Instagram tagging @GymCastic and @PrecisionChoreo using #BeerWithBetty:

The winner will be selected at random among everyone who completes all ten items.

Can we talk about how Bi Wenjing\’s Mo salto has got to be infinitely harder done from inverted grip?! Unreal.

Simona Amanar did ALL of Dominique Dawes’ tumbling passes…plus a triple twist. I think the medals are correct.

Loved the show as always.
A couple of comments …
On releases coming from high bar to uneven bars, I take your point that a front somersault over the bar is a Mo salto. Any idea why Tkatchev, Deltchev, Geinger, Jaeger, etc weren’t renamed after the first woman who did them? Seems inconsistent. Unless or falls into the category of being done by more than one woman for the first time in the same competition so it didn’t get named after anyone – that’s the only reason I can think of.
And on falls, I think the Gogean one is significant because she oermanately altered her routine and never performed 3 backwards skills again. And it was v unusual at that time not to have a 3 skills backward acrobatic series.
Thanks for all your work! Love it!

I feel like, on vault, the order mattered in who finished first and who finished second. Simona Amanar had a huge advantage going last, especially after Miller and Grosheva, who both had so much trouble, and so far after Mo Huilan. Even though her vaults weren\’t her best, they were much better than what the previous two athletes had done. If Mo had gone last, or even seventh, giving the judges a direct comparison between the two, I do think she could have finished first (although I\’m not sure she would have, because as you both noted, she was underscored on vault throughout the event).

It was also so stupid that Tesh and company decided that Mo Huilan was getting interviewed because she thought she had won already. She had just secured her first (and only) Olympic medal, so I’m sure that’s why they interviewed her. Still it’s a good point that security shouldn’t have let that interview happen down on the floor, along with the bazillion flash bulbs during every single routine.

Lilia actually had some subtle form breaks during bars – particularly on her Geinger and bail. The BBC broadcast shows it more clearly, so that’s likely where the judges deducted. Her toepoint and extension though were beyond exquisite. Dawes missed her handstand before her Shaposhnikova on low bar by quite a margin, so between that and the arch before her Hindorff I can see why she only got 9.8 even with the stick. Chow had more difficulty than anyone, so I could forgive her for that sole circle transition 🙂

Interestingly enough, there was more difficulty required in event finals due to the COP requiring an extra C or higher skill to get the 9.4 base value. Some folks already had enough difficulty in their routines to get the 10 SV, but some added more to fulfill the requirement. Kotchetkova added a 2nd Rulfolva perhaps for that purpose, though her routine was crazy difficult already. Miller in 94 had to add the punch front/wolf jump mount to her EF routine because without that she would have been out of a 9.9. Same with Moceanu throwing an extra front full on FX here in EF.

Such a shame that there was no entrant from China in the beam finals, between Mo Huilan botching her TF dismount to Kui Yuan Yuan missing the finals because of that forward roll in compulsories. Still I was so happy that Shannon won. FYI the skill that Peggy Liddick mentioned was a “mistake” was actually the Miller – Shannon’s wrist was in such bad shape that she couldn’t even train the skill, so she only threw it in competition. Basically she had to cheat the turn a little, but you could hardly notice anything. Even when she was off Miller always made everything look so polished.

Another great recap! Miller didn’t get to warm up her Phelps vault, which is why she struggled with the run-up and entry. Nunno had her warm up her Yurchenko 1/2 and 1 1/2 but didn’t get to the Phelps in time. Gogean should have been deducted more than she got for doing the 1/2 turn so late on her Phelps (really turning it into a back layout 1/2 instead of a 1/2 front layout, which is much harder). That huge lunge step on Amanar’s 2nd vault should have been far more deducted, but her DTY was incredibly high and far.

Miller’s wrist was so bad that she didn’t even get to practice her signature “Miller” skill on beam, so Peggy said she only threw it in competition. She had to cheat a little on the pirouette because of the wrist – this was the “mistake” that Peggy said she made in her routine. As always Miller shined, and I was so happy for her to win beam after the tough time she had in the AA.

Interestingly, in event finals in 1996 the COP required slightly more difficulty. I think there was an extra C skill or higher required to get the base value of 9.4. That’s why some gymnasts added a little extra difficulty in places, like Kotchetkova throwing a 2nd Rulfova (which she didn’t throw in team or AA), or Moceanu adding the 2nd front full. In 94 Miller had to add her punch front mount to her beam routine in worlds finals for that same reason.

It was also ridiculous that Tesh and company thought Mo was celebrating winning gold on vault, with Amanar still to go. The girl had finally broken through for a medal, so I’m sure that’s why they were interviewing her. Still, it’s a good point that the security should not have allowed media to interview the athletes down on the floor, not to mention the bazillion flash bulbs…

Maybe next someone will commission the 200o Olympics? So much drama! Two hours would probably be only enough to cover Khorkina alone 🙂

Great episode! I recently discovered your podcast and have thoroughly enjoyed your episodes. Finally, I have found people as gym crazy as I because my friends certainly are not haha! Not only was Mo underscored, but I feel like the Chinese gymnasts have been underscored for decades. Doing things with such beautiful form makes the skill much harder.

I have a very different impression from the commentators\’ remarks about Kochetkova on beam however. I feel like they are praising her difficulty and her ability to do multiple twisting elements. It sounds as though they are explaining to the average TV spectator why it\’s fine she does the same element several times, noting she does it from different entries.

I, too, have only recently discovered this podcast and have loved listening to them dive back into these competitions. But I think they often brought their 2018-level disgust with NBC and their trio to these 1996 Olympics, which I think is the best NBC ever was with their commentary (which isn\’t saying much). Elfi\’s commentary in particular during the compulsories was measured, meritocratic, and insightful.

I was a bit dismayed at how gleefully these two pointed out Tim and Elfi\’s factual errors, roasting them as if they had said something actually offensive, while then going on to make numerous small errors themselves, from scores to World titles. Because they\’re human. And they\’re speaking on the spot. Kinda like Tim and Elfi.