This week on the podcast, a full recap of the Secret U.S. Classic from glorious Chicago suburbs.  Uncle Tim, Lauren, and Jessica chat about the best upgrades, moments, skills and routines, including:

The Gymternet’s best moments from podium training, complete with Gifs!

Two women have repeated as the Olympic all-around champion in back to back Olympic Games, Larisa Latynina of Soviet Union in 1956 and 1960, and Vera Caslavaka of Czechoslovakia in 64 and 68. No American all-around gold medalist (we’ve only had four ever!), has ever made a second Olympic team; only one has even officlally tried, Nastia Liukin, by competing at the Olympic Trials. It’s pretty common to make another Olympic team. Four Olympic all-around gold medalists have made a second Olympic team after winning all-around good: Larisa Latynina, Věra Čáslavská, Ludmilla Tourischeva, and Nadia Comăneci. 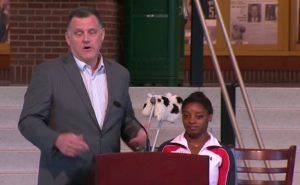 Part of Mykayla\’s song is (I\’m 99% sure) the Mormon hymn Praise to the Man. Originally, it was a Scottish folk song, so I\’m not sure if the intention was to use the Scottish song or the Mormon one. Either way, the music was not my favorite for a floor routine… but perhaps that went into the decision?

Yeah – that tune is Scotland the Brave and it is still one the most well known Scottish songs around the world. I had no idea it had been used as the tune for a mormon hymn, so I’m guessing the folks in Glasgow wouldn’t know that either! But they will know how to clap along if she gets there!

The people in Glasgow will not know any different and just clap along. She couldn\’t of got much more Scottish unless she used Flower of Scotland, and then we would all just sing along!

I also didn\’t know it was a Mormon hymn, and only picked up on the Scotland the Brave reference even though it is a dance remix of it!

I _love all the episodes with Lauren! This one had me laughing out loud several times. Which is normally great, but perhaps not so much when you’re commuting in a train full of tired people.
In the end I had to put my hair up, so people could see that I had earbuds in – and that I wasn’t just randomly laughing at nothing.
Thank you for this episode, and thank you for being my favorite commuting-buddies. You lightened a dull day in Copenhagen.

While Mykayla struggled on three events I was blown away by her bars routine. I can not believe how much she has improved since American Cup!!! https://www.youtube.com/watch?v=CEvX4X1U-yQ