Danell Pecht and Kerri Joyce are getting two tickets each for floor seats, t-shirts and hospitality at Elevate the Stage! 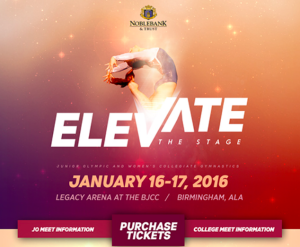 Hi! Nice podcast! Found you guys just a few weeks ago and have been following ever since. You guys are awesome, keep on the good work.

I think Brazil is in a bigger \”oh crap here comes test event\” because we had T-H-R-E-E injuries in top gymnasts (2 being ACL tears), including Andrade a week before PanAms, which had 6+ routines on all apparatus, including an awesome Amanar and a 1 1/2 double back as first pass. We still have a good team, but since most of our competitors for the last spots are also good (Netherlands, Germany, Japan, Australia, Italy, France) we may need 100% hit routines and someone to fail in order to get the Rio team spot this month.

You meant Wang Yan as a wow floor routine (it is, actually; double double, 1 1/2 to triple to punch front, 2 1/2 to front layout and double back), but i think you meant Sae Miyakawa from Japan, which has a full in layout, front layout to double front, double layout and double double AS A DISMOUNT. Interestingly, her routine is .1 behind Wang Yan\’s because her dance routines are just A, B and C. But on tumbling she is on par with Simone, which is CRAZY from a tiny japanese girl.

\”He has a big D and know how to spread his legs\”. I died while spitting water on the screen.

Also, I think this question has probably been asked but I don\’t know to look for it: is it possible to make the podcast available for download? Since I don\’t have a lot of free time, it would be nice to hear you on my ipod while commuting, or on the bus, cooking etc etc.

Sae Miyakawa on floor is unnnnnreal. First of all, her body tension in her full in double straight is perfect. I think what\’s most impressive, however, is that her knees are glued together in her double front a la Ivana Hong. She 100% rivals Simone in terms of her tumbling – great to watch!

Yes, you can try Stitcher for downloading the podcasts!